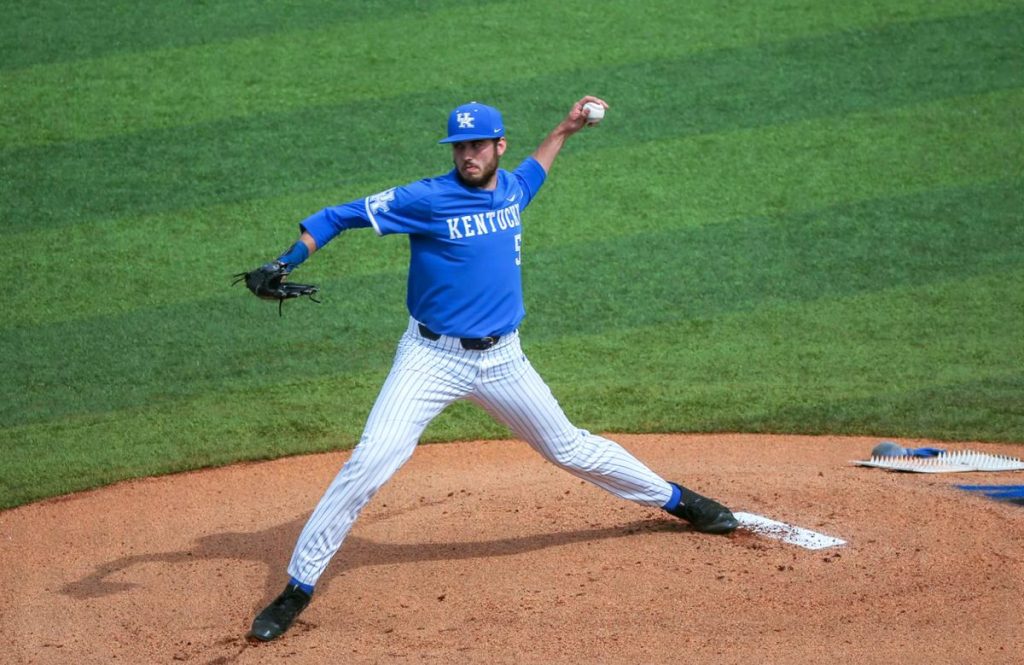 Photo Taken By Sarah Caputi (UK Athletics)
Mason Hazelwood pitched just six games before discovering his Ulnar collateral ligament was torn. The former Titan hopes to recover before the beginning of his fifth and final season of college baseball at the University of Kentucky.

In the midst of Kentucky Wildcat pitcher Mason Hazelwood’s outstanding start to the 2021 season, he suffered a setback. The 2017 Mercer County Senior High School graduate pitched 25.1 innings over six games, striking out a career high 12 batters in a 6-1 win over Georgia State, while holding opponents scoreless for 15.1 consecutive innings spanning four starts.

“After the Georgia State game I noticed my pitches didn’t have life like normal. My fast ball didn’t have its pop out of hand, my slider wasn’t breaking normal and my change up wasn’t consistent. Once that happened I was already questioning what was wrong,” said Hazelwood.

In the first game of the Wildcat’s double header against Auburn on March 27, Hazelwood pitched three innings before subbing off due to tightness in his elbow.

“I thought I’d do the responsible thing and take myself out before it became something serious,” said Hazelwood, who soon found out after a trip to the doctor that his ulnar collateral ligament was torn. The UCL connects the upper arm to the forearm over the inner elbow. Typically, an athlete who undergoes Tommy John surgery will take anywhere from a year to two years to fully recover from the operation; Hazelwood says he is trying to pull off a miracle in being ready after 10 months for the beginning of his final season at the University of Kentucky.

It was especially difficult to face a serious injury while performing at the top of his game in his senior season. Hazelwood was impressed with how the Cats lined up prior to the 2021 season, and felt the best he ever had on the mound until the Georgia State game.

Hazelwood set the Mercer County record for most strikeouts in one game with 17 in a win over Woodford County in the spring of 2017. Since his days as a Titan Hazelwood’s game has grown tremendously, as he’s received coaching from former pitching coach Jim Belanger and current pitching coach Dan Roszel, who both had a significant impact on his performance on the mound.

“When I got to UK, my first week on campus I learned real quick that I knew nothing about baseball,” Hazelwood said. During his initial years in college, Hazelwood was taught the mental side of the sport, and now under Roszel he believes he has received the best of both coaching styles.