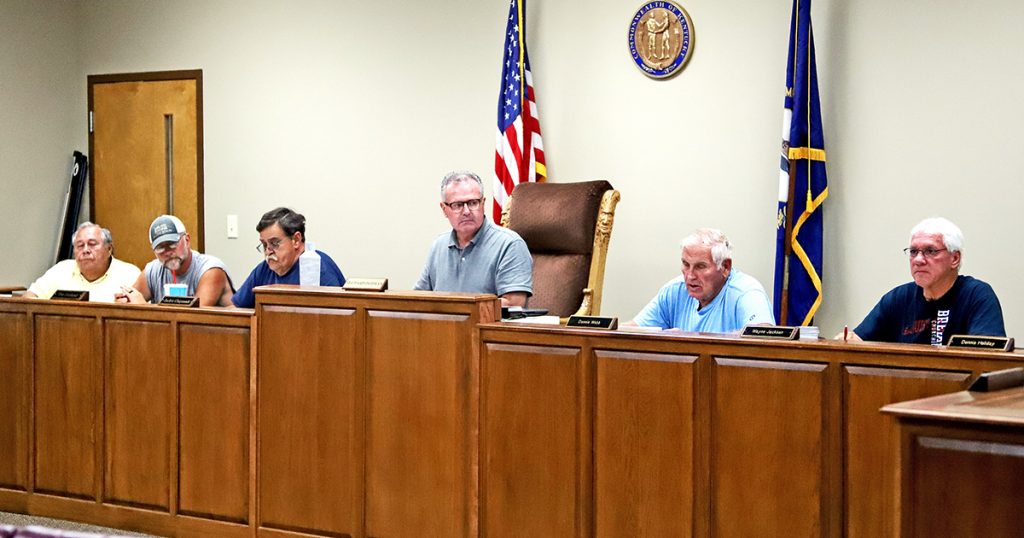 Last week, the magistrates voted to join an interlocal agreement with Garrard County, Lincoln County and Casey County to jointly operate a single 911 dispatch service center in Lancaster. The Harrodsburg City Commission had voted to close down the communications center the day before.

Before taking the vote, Judge-Executive Milward Dedman asked Harrodsburg City Commissioner Adam Johnson to provide some background on the issue. Both the city and county pay for the 911 service center, which the city operates. Johnson, who oversees the police, fire and communications departments, said the city has had staffing issues for the last several months.

“We cannot retain staffing,” Johnson said. He said they were struggling to keep up with the pay offered by other localities. “Our top end is not even the low end of other dispatch centers.”

“This is something we’ve worked on now for several months,” Johnson said.

Rumors on Facebook had Mercer merging 911 operations with the City of Danville. According to Facebook posts, Danville was already hiring dispatchers to handle Mercer County calls. Johnson said Mercer officials had met with Danville, but it would be too expensive.

There are currently only two full-time dispatchers at the communications center, he said. When the counties merge 911 service, staffers would be able to work fewer hours because they would not having to be cover shifts.

Officials say the dispatchers have already been told about the change. There are jobs available with Bluegrass 911, and the shifts would be better. It was also noted there is no time commitment for joining Bluegrass 911, while other localities required a contract.

“It will be a good move for the citizens because they will have a lot better coverage,” Johnson said.

“Their facility is top notch,”said Sheriff Ernie Kelty. He said five dispatchers will be on duty at all times at Bluegrass 911.

Kelty said he would prefer to keep the communications center in Mercer County.

“Because of the cost, we know that’s not an option, now we have to look at another alternative, ” the sheriff said. He said he had spoken with sheriffs at Lincoln and Garrard County and they had been positive.

“If we can’t fund our own, I think Garrard County is our next step,” Kelty said.

The sheriff said citizens need to know if they call 911, Mercer’s first responders will still handle the complaint.

“They’re getting the same folks they always have,” Kelty said, “Us.”

Chief Maxfield said he was also impressed with the Bluegrass 911 facility. Maxfield said the actual physical location of the 911 center isn’t really an issue.

One commonly cited concern is dispatchers finding the many places in Mercer County that do not exist on any map. Maxfield said the system used by Bluegrass 911 allows them to track callers’ locations.

As far as places that everyone refers to by names that are not on maps, such as the Cricketeer plant or Hops Diner, Maxfield said Bluegrass 911 officials had promised they would do their best to learn the names.

“If places such as the Cricketeer building have been previously entered in the system, it will pop up automatically,” said Harrodsburg Police Chief Brian Allen. “I think within a month, the citizens won’t have those concerns.”

Asked for any potential negatives, Allen said, “I really couldn’t come up with many.”

“If you all are good with it, I trust your judgment,” said Magistrate Tim Darland. He moved to join Bluegrass 911, which was seconded by Magistrate Jackie Claycomb. The motion passed unanimously.

It will take AT&T several months to switch over. While the phone company relocates the trunk line, Bluegrass 911 dispatchers will staff Harrodsburg communications center.

“We’re covered,” Sheriff Kelty said. “There is not going to be any time lapse.”

Bluegrass 911 will take the funds from wireless and land lines. If there is a deficit, it will be divided up between the four counties based on call volume. All four counties will have an equal representation-three reps each.