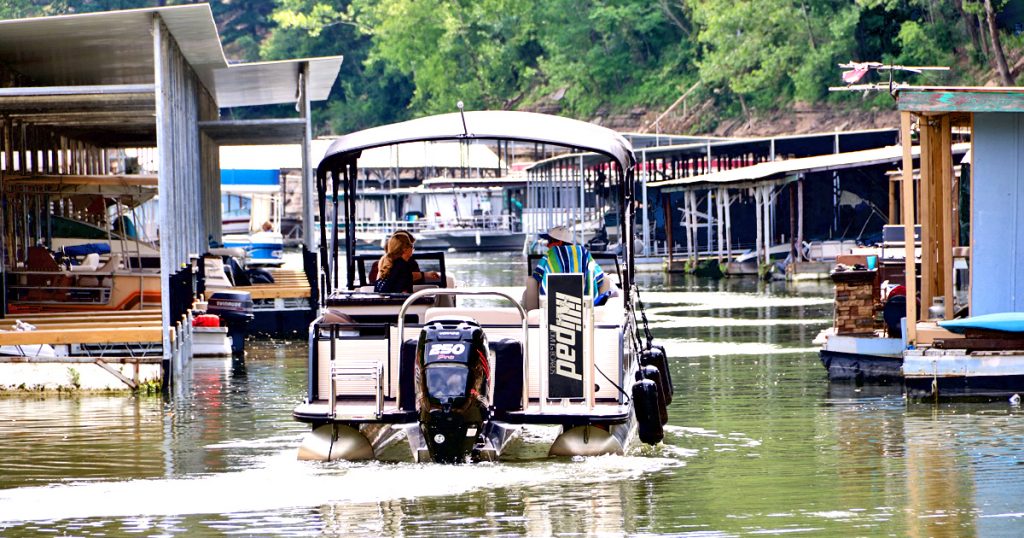 A boater makes his way out of Pandora Marina several years ago. (File image).

Police are looking for a hit-and-run boater and the public is being asked to remember basic boating safety before going out on Lake Herrington.

On Saturday, June 26, a man operating a Sea Ray Runabout crashed into a pontoon boat with four people aboard during a glow stick show in Garrard County. According to reports, the Runabout took off. The operator never stopped to help the people on the pontoon, which was so badly damaged it had to be towed back to dock.

No one was seriously hurt, but one passenger lost an expensive pair of prescription eyeglasses in the crash.

“I heard something coming and I turned around and looked, I could see the boat just about to impact us, I told everyone to hang on,” said Bennett Doty, who was operating the pontoon boat.

Doty told WKYT the crash left the pontoon a mangled mess. While the water patrol is investigating, Doty, whose said he was looking for the Runabout operator himself.

Doty, whose post about the incident has also been shared on the Herrington Lake Locals Facebook page, told WKYT several people had messaged him about the identity of the hit-and-run boater.

Independence Day is the peak of the season for Herrington Lake. Over the holiday weekend, Kentucky Fish and Wildlife arrested three people for operating a watercraft while intoxicated, according to the Boyle County Detention Center website.

In Kentucky, a life jacket is required for every passenger aboard a boat. The U.S. Coast Guard reported that 76 percent of boating deaths in 2017 were due to drowning and 84 percent of the victims were not wearing a life jacket.

But it’s not enough to have a life jacket on board. The National Safe Boating Council recommends wearing the right life jacket for the activities you will be doing.

The jacket should also fit properly for the wearer’s size and weight and be properly fastened. To check, hold your arms straight up over your head, ask a friend to grasp the tops of the arm openings and gently pull up; make sure there is no excess room above the openings and that the jacket does not ride up over your chin or face.

And remember, under Kentucky state law, it is unlawful to operate a watercraft in a reckless, negligent or dangerous manner. That includes weaving through congested waterway traffic, steering toward another object or person in the water and swerving at the last possible moment in order to avoid collision, cutting between a vessel and the person(s) being towed by that vessel, jumping the wake of another vessel in a way that endangers another’s life, safety, or property and excessive speed. It is illegal to operate a vessel at greater than idle speed or slow in any areas marked as “No Wake.”