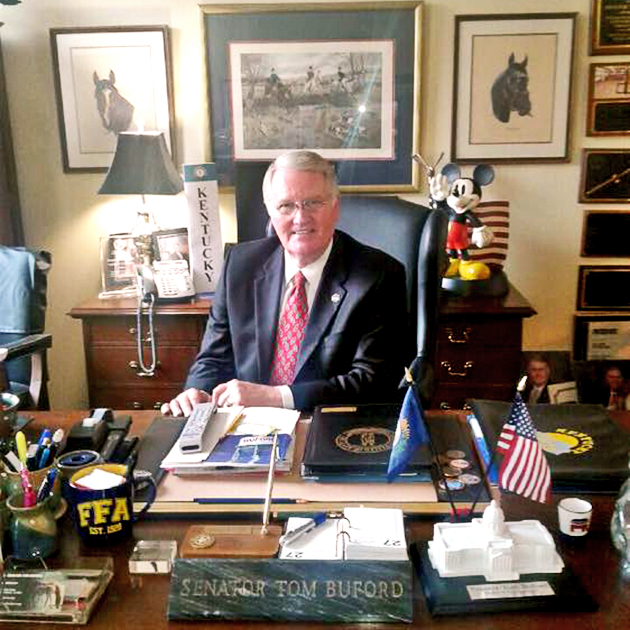 Politicians from Mercer County and across the state and from both political parties are paying their respects Sen. Tom Buford who died July 6 in Pensacola, Florida.

According to WTVQ, Buford was battling cancer. He was 72.

Buford has represented the 22nd Senate District—which includes Mercer, Fayette, Garrard, Jessamine and Washington counties—since 1991. Buford won re-election in 2018. His term expires at the end of 2022. A replacement will have to be appointed until a special election can be held.

In the current session of the state legislature, he served on the appropriations and revenue committee, the banking and insurance committee and the licensing and occupations committee.

Buford was a Republican, but officials from across the political spectrum paid their respects. Statements are drawn from social media accounts and media reports.

Burgin City Councilman Sindicat “Sid” Dunn: “Rest in Heaven my buddy. Thanks for your mentorship your jokes and most of all your character you truly wasn’t a party but a person.”

State Rep. Kim King: “I am heartbroken to hear that Senator Buford passed away. Because my House District is located entirely within the 22nd Senate District, I had the opportunity to get to know him as we worked on district priorities. It was a privilege to work with him and an honor to be his friend. I will miss his sense of humor, his love for the people of our state, and the incredible optimism he showed regardless of the situation we faced. The loss of his leadership will be felt locally and in the halls of the Capitol. I hope that his wife and family find comfort in knowing their loss is shared by so many who held Tom dear.”

Auditor of Public Accounts Mike Harmon: “I am saddened to learn of the passing of my friend, Senator Tom Buford. Not only was Tom my state senator when I was first elected to the House until the last round of redistricting, he was also a valued friend and a mentor to me when I was a state representative.

Tom had a great wit about him, and he loved serving the people of his district and the Commonwealth as a whole for over 30 years. Lynn and I offer our prayers and support to his family.”

Lt. Gov. Jacqueline Coleman: “Kentucky lost a long-time public servant today. Tom Buford served as my senator for most of my life, and alongside my dad in the House of Representatives. We might have belonged to different political parties but Senator Buford always listened and was kind and respectful. Let our commonwealth live by that example.”

Gov. Andy Beshear: “I am sad to hear of the passing of Senator Tom Buford. Britainy and I pray for solace and peace for his family.”

U.S. Senate Republican Leader Mitch McConnell: “I was deeply saddened to learn of the passing of Tom Buford, a giant of the Kentucky Senate who dedicated three decades of his life to public service. I had the pleasure of working closely with Tom and know how deeply committed he was to our state and its people. His sharp intellect and extensive legislative experience were legendary throughout the Kentucky political world.

“Tom was unafraid to take on tough issues and fought hard for Kentucky’s most vulnerable, with a special focus on the disabled. The impact of his work could be felt far beyond the borders of his State Senate district, improving the lives of Kentuckians throughout the Commonwealth. He uplifted our state through his dedicated leadership, not just as a civil servant, but also as a caring father and faithful Christian.

“Tom’s constituents, colleagues, and fellow Kentuckians are profoundly saddened by this loss. Elaine and I share our heartfelt condolences with Tom’s wife Carol, his daughter Stephanie, his son Beau, his grandchildren, and the entire Buford family.”