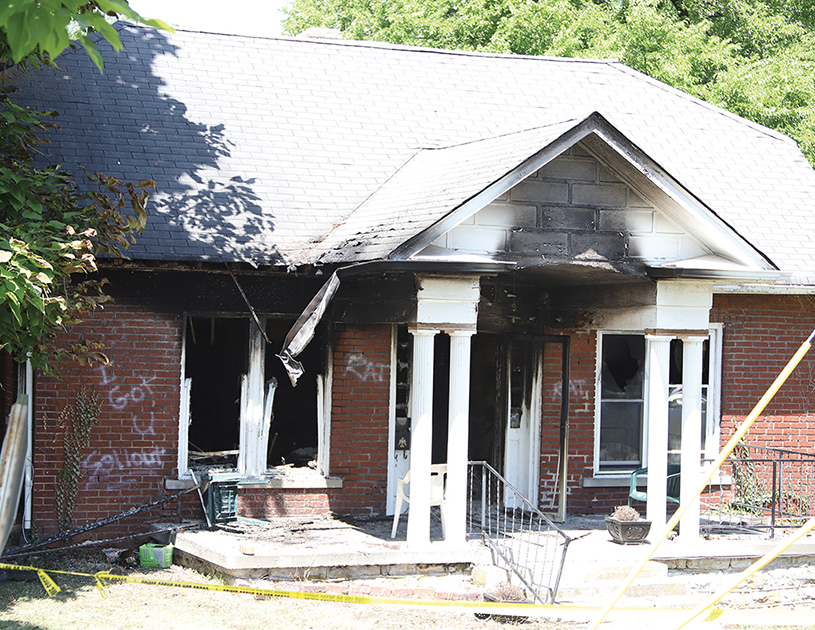 The Harrodsburg Herald/Robert Moore
Officials are looking into the cause of a fire that gutted a home on Magnolia Street early Tuesday. While the residents managed to safely escape the blaze, one firefighter was treated for an injury received while fighting the fire.

A state investigator has been brought in to determine the cause of a fire that happened at the intersection of South Magnolia Street and West Office Street in Harrodsburg.

According to the Harrodsburg Police Department, evidence indicative of arson was found in one of the living rooms of the structure. Officials are now investigating the incident as arson.

“It didn’t take too awful long to get it under control,” Smith said.

He said Mercer County Emergency Medical Services also responded, but the residents of the house were able to get out without injury.

The residents returned to the house on Tuesday morning, They confirmed they were uninjured and asked not to be identified.

One firefighter was injured during the blaze. He was treated and released, Smith said.

Smith declined to comment on the cause of the fire. He said Cpl. Aaron Steele of the Harrodsburg Police Department is handling the investigation.

Smith also said an investigator from the Kentucky State Police from Harland has been called in to help.

There are spray-painted messages outside the house, but Smith declined discussing an open investigation.

“There’s really nothing we can discuss now,” Smith said.

The Harrodsburg Police Department is asking anyone with information relating to the crime to contact the department’s non-emergency phone number at 859-734-3311 or 859-734-5120.

Members of the community who choose to help law enforcement through Crime Stoppers can remain anonymous and may be eligible for a cash reward.

For more, check out this week’s edition of the Harrodsburg Herald.