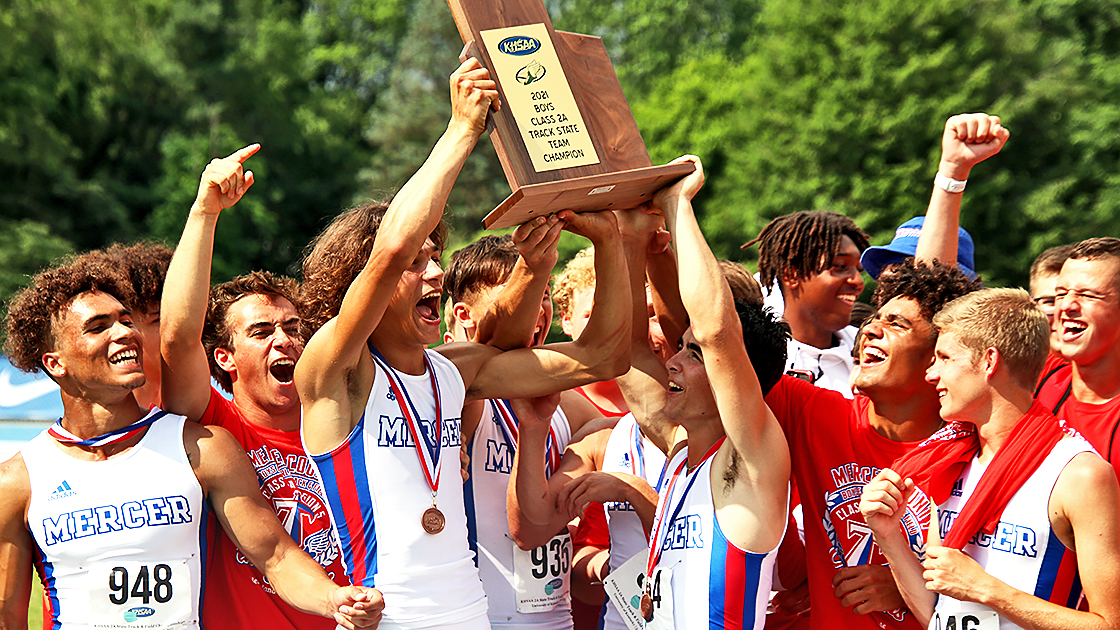 The Harrodsburg Herald/Sam Warren
The Mercer County Senior High School boys track and field team were all smiles after winning their first state championship since 2017. The squad scored 78.5 points during the class AA track meet on Friday, June 11, edging out Highlands with 75 points.

The Mercer County track and field team is celebrating their fourth state championship in five years, and the first championship for the boys’ team since 2017. The Titans approached the class 2A meet with confidence insured by depth, senior leadership and talent, and left with a narrow victory that was decided on the last race of the meet.

Both the boys’ and girls’ teams were neck and neck with their opponents as the final event -the mile relay- of the meet began.

The Lady Titans trailed the Christian Academy of Louisville 72-64 before the race started and despite Harlee Settles, Jai Maria Piazza, Teigh Yeast and Timberlynn Yeast winning the race with a time of  4:01.64, the Lady Centurions were right on Mercer’s tail, and won the class 2A state track meet, beating out the defending champions 80-74.

“I really wasn’t too restless, but I did feel that it was my duty to make sure I got to the boys because I knew how good North Oldham was, I knew how good Highlands was, and I felt like I needed to get to the boys and let them know where we stood,” said Coach Terry Yeast. “I told them what the minimum was that we needed to score and I said anything you can do better than that is gravy.”

The boys were leading Highlands by 5.5 points as the mile relay began and all the Titans needed was to finish higher than fifth. The new personal record of 3:27.61 for the team composed of Jalen Lukitsch, James Johnston, Riley Peavler and Noah Davis was just enough to outscore Highlands who placed second in 3:25.49, and win the meet 78.5-75.

Clayra Darnell, Abby Dean, Erin Darland and Emily Steele earned the Lady Titans their first points of the day with a sixth place finish in the 4×800 meter relay, finishing in 10:29.98.

“When you get down to running 45 at any point, that is just amazing. She’s got two years left and she is a second off of the state record, so I feel like when it’s all said and done she will get that record,” said Yeast.

Johnston and Thaddeus Mays finished first and second at the Region five meet but Mays was a bit too eager and false started, and Johnston ran a 17.97 finishing last. Lukitsch’s 39.26 time in the 300 meter hurdles took first place and Johnston’s 42.31 time claimed fifth.

Coach Yeast said that prior to the season he didn’t think the Titans had any hurdlers on the boys side, and only Settles on the girls team. Piazza, Lukitsch and Johnston all scored points for Mercer during the state meet, completely exceeding Yeast’s expectations ahead of the season.

“I’ll be honest with you, we didn’t think we had any boys that could hurdle so we just started trying out 4-5-6 different boys and the fact that we had two boys ranked in the top four in both hurdle events, along with a girl that was number one in both hurdle races, that is amazing,” Yeast said.

Timberlynn Yeast placed fifth in the 100 M dash, finishing in 12.68 seconds and earning four points for the Lady Titans. Yeast went on to dominate the open 400 M in 57.39 seconds, winning the first of her three state champion medals ahead of Mia Schoenbeck of CAL. She continued in the 200 M, just edging out Lillian Sebastian of Ashland Blazer with a 25.62 second school record breaking finish and another ten points for the Lady Titans.

of Trigg County could outsprint Brown in the open 200; Martin took first place in 22.06 seconds and Brown second in 22.22.

Sophomore Clayra Darnell earned a fifth place medal after running a 5:24.04 time in the mile. She also placed fourth in the two mile run, finishing in 11:56.50, ten seconds faster than her time at region.

Jackson and Riley Peavler, joined by Lukitsch and Brown finished third in the 4×100 M relay. The group ran .82 seconds faster than their time in the Region 5 meet and scored six important points for the Titans on their way to the title.

Davis placed second in the open 400 M, finishing just behind Jake Welch of Highlands with a time of 50.64. Jonah Lewis also ran the race and placed eighteenth in 54.46 seconds.

Senior Abby Dean was the only Mercer athlete to qualify in the 800 meter run and finished in 2:34.47, placing sixteenth.

Sophomore Lindsay Jessie threw the shot 30 feet and half an inch, placing twelfth at state in her first season of track and field.

Lleyton Penn heaved a 46-07.75 foot attempt in the shot put, placing eighth and earning the Titans a point.

Senior Bella Garrett placed nineteenth in the long jump with a mark of 14-06.75 feet. Garrett and teammate Aaliyah Alcorn placed eleventh and twelfth in the girls’ triple jump, leaping 32-01.25 and 31-06.50 feet respectively.

Matthew Mays placed third in long jump with a leap of 21-01.50 feet, just three inches away from the top spot. Thaddeus Mays finished just ahead of Matthew in the triple jump with a jump of 42-06.50 feet to take third place. Matthew’s 42-05.75 foot jump was enough for fourth place as the pair earned 11 points in the event.

Senior Bryce Walton earned the Titans 5.5 points in the pole vault competition after tying with Alex Lockhart of Boyle County, vaulting 11-06.0 feet. T. Mays finished in ninth place with a jump of 10-06.0.

Mercer County has won the boys state championships in 2016, 2017 and now 2021. The girls have finished in the top two spots in each of the last three seasons and won the meet in 2019.

“Any time you can win a state championship it’s an incredible feeling and to have done it four times. All I can say is I’m blessed and I’m thankful to have an awesome coaching staff, a great group of kids, and to be honest I have a top notch set of parents and grandparents that are committed to making sure that their kids commit to our program. It takes a village, and that’s what we’ve been trying to do to build this program,” said Yeast

A large proportion of Mercer County’s success in track and field this season is due to their 13 seniors, 11 of which have been with the program since their freshman year. Coach Yeast’s goal has always been to build a dynasty of Mercer County track and field and this year’s senior class has won a state championship and been runners up two times on the girls side, and accomplished their first championship in four years on the boys side.

“When you have 11 out of 13 seniors that have committed four years to your program, that is absolutely amazing. I am so elated with all of their success and their commitment to this program, it’s been amazing,” said Yeast.