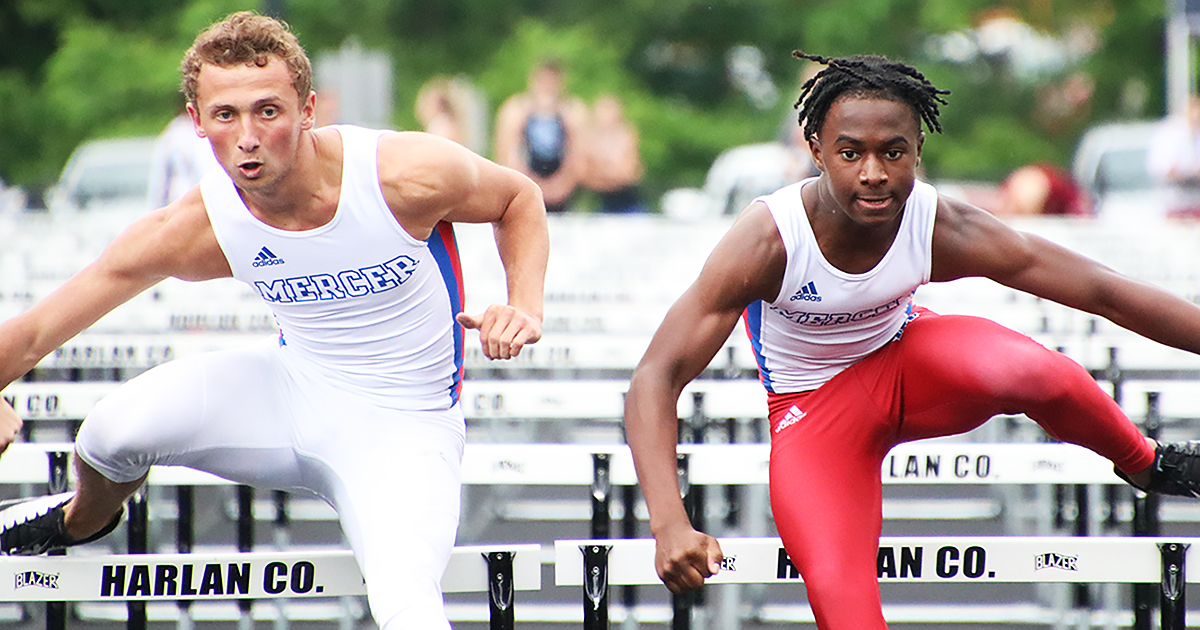 sports@harrodsburgherald.com
The Mercer County track and field team brought home two Region 5 championship trophies this past Wednesday, June 2. The Titans did the double, winning the girls competition with 146 points while second place finishers Corbin earned 78.5 points. The boys scored an astounding 167.5 points, also ahead of Corbin with 137 points.
Boys
James Johnston and Thaddeus Mays got the Titans off to a great start, finishing first and second place in the 110 meter hurdles. The pair ran side by side the entire race and finished one tenth of a second apart, James in 15.99 and Mays in 16.10.
Beau Brown is the fastest sprinter in Region 5 and displayed his talent by scoring 38 points for the Titans; winning the 100 M and 200 M open sprints and earning 18 points as a part of the 4×100 and 4×200 relay teams. The sophomore finished 100 M in 11.26 seconds, and junior Jackson Peavler placed fifth with a time of 11.53 seconds. Brown ran the 200 M dash in 22.59, while senior Noah Davis finished fourth in the race.
Senior Jalen Lukitsch, Davis, Riley Peavler and Brown won the 4×200 M relay in 1:31 seconds. The 4×100 M relay team composed of Brown, Lukitsch, Brady Peavler and Brayden Dunn placed second right behind Corbin, qualifying for state with a time of 44.42.
Davis and junior Jonah Lewis placed first and second in the open 400 M dash, Davis finished in 50.64 and Lewis in 53.73.
The Titans finished first and second place in both boys hurdle events during the meet as Lukitsch and Johnston won the 300 M hurdles race in 40.68 and 41.94 seconds respectively.
Region 5 is packed with talent in the shot put ring and despite finishing fifth, Lleyton Penn qualified for state with the seventh longest throw in 2A, 46-03. Penn also placed fourth in discus with a throw of 123-04, and will compete at the state track meet in both events.
Junior Matthew Mays leaped 21 feet and five inches to finish first in the long jump, while Dunn, who jumped 18-05.75, missed out on the state meet and placed sixth. M. Mays returned to the pit, jumping 43-02.25 in the triple jump to earn first place. T. Mays finished second with a jump of 41-09.
Zeyden Jackson jumped a 5-06 in the high jump to earn a fourth place finish and a trip to state. Pole vaulters Bryce Walton and T. Mays had impressive performances. Walton vaulted 12-06 to finish second at the meet and set a new personal record and school record. Mays vaulted 11 feet even, placing third and also qualifying for state.
The Titans ended the meet with a dominating performance in the mile relay. Davis, Lukitsch, R. Peavler and Johnston finished in 3:30.94, ahead of Corbin’s team who ran a 3:38.36, to end the meet in a dominating fashion, much like it started.
Girls
The Lady Titans opened by finishing in first and second in the 100 M hurdle sprint as Jai Maria Piazza and Harlee Settles finished 1-2 in 15.96 and 17.56 seconds respectively. The Lady Titans 4×800 meter relay team placed second behind Lincoln County to earn a spot competing in the 2A state championship.
Sophomore Timberlynn Yeast ran a 12.46 second 100M dash to gather another 10 points for the Lady Titans and set a new school record. The 4x200M relay team composed of Settles, Piazza, Bella Garrett and Erin Darland finished first with a time of 1.50:68.
Sophomore Clayra Darnell placed second in the mile with a time of 5:17.18 and first in the two mile, finishing in 12:07.06, and earning two state qualifications and 18 points for the Lady Titans.
Timberlynn Yeast continued to dominate, placing first in the open 400M and the open 200 M sprints. The sophomore ran a quarter mile in 56.98 and finished 200 meters in 27.01 seconds. Yeast’s 400 time is substantially faster than any other competitor in class 2A, Sarah Rankin is ranked second with a personal record of 59.49. Yeast is also ranked third in class 2A in the 100 and 200 meter dashes and will be pivotal to the team’s success at the state track meet.
Piazza was able to finish in first again in the 300 M hurdles in 48.74 seconds, and Settles was right behind her, but Mekanzie Cornett of Harlan County finished one third of a second faster than the senior to take second. Settles’ time of 51.26 was still enough to qualify for the state meet.
Senior Abby Dean finished fourth, but still qualified for state in the open 800 M with a time of 2:31.03.
Senior Kendall Edelen placed first in the discus competition, throwing the disc 92-07 feet. Garrett placed fifth in the long jump with a jump of 15-04.75, but was one of the next 10 longest jumps in class 2A and will compete at state. Garrett earned qualification in the triple jump as well, jumping 33-04.50 feet, finishing in third place. Lindsay Jessie qualified for the state meet in shot put, throwing the shot 27-08.50 feet and earning a sixth place finish at the region meet.
The Lady Titans finished just like the boys’ team, winning the mile relay with ease and earning a top four time in the state. The team composed of Settles, Piazza, Teigh Yeast and Timberlynn Yeast ran a 4:11.13, 23 seconds ahead of second place Boyle County.
Mercer County has won five Region 5 championships since Terry Yeast began coaching in 2015, and this is the first season in which both boys’ and girls’ teams won the competition in the same season.
“I was extremely happy. You just never know, going into region, how you’re going to fare. It is the biggest meet of the year and you need your kids to perform well so they can be in a great position for lane assignments at state. Of course, you always want to go in with an opportunity to win. It was super awesome and I’m very proud,” said Yeast.
The Titans qualified some athletes Yeast had not expected to qualify for the state meet on Friday, June 11. The Titans depth and exceptional talent has them in prime position to earn their fourth and fifth state titles since 2016.

For more great stories, check out this week’s edition of the Harrodsburg Herald. Click here to subscribe to the online version.