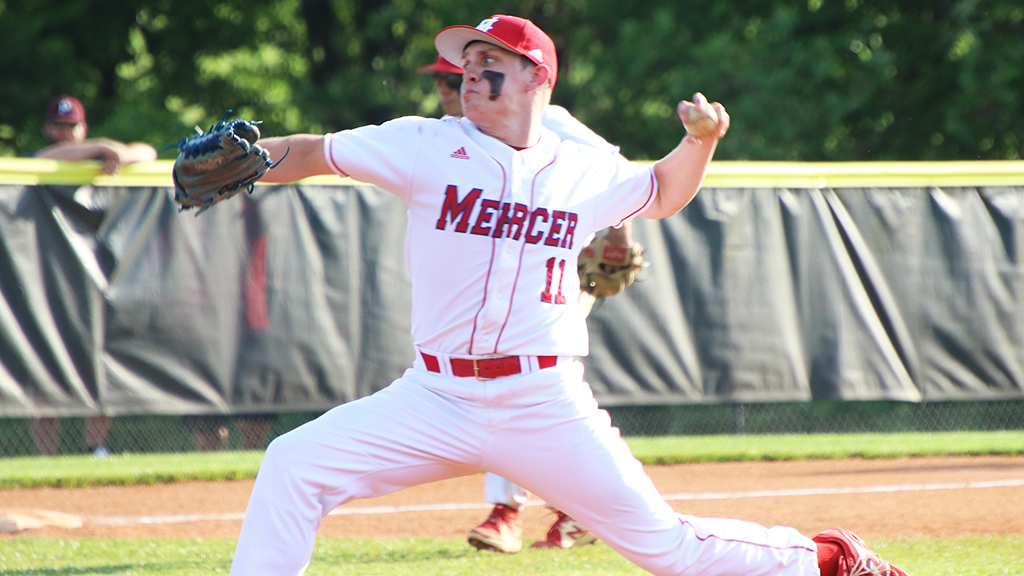 The Harrodsburg Herald/Samuel Warren
Senior Sammy Berger pitched one inning during the Titans’ loss. Berger, the fourth pitcher to be brought on, allowed two hits, two runs and two walks in the inning.

The Mercer County baseball team’s hopes of a Region 12 tournament run ended abruptly in the first round this past Saturday, June 5. The Titans (28-8), could not keep up with Boyle County’s (22-14) brilliant batting performance; Boyle had an astonishing 20 hits including three home runs and five doubles. The Titans pitched four different players, but no matter who was on the mound the Rebels kept swinging and rounding the bases at will.

Eli Glasscock started the game with a base hit, grounding to left field. Luke Gaffney hit a drive to right field and Jackson Peavler couldn’t keep it in front of him, allowing a double and Glasscock to score. Cole Sims was hit by a pitch before Kamron Myers smacked the ball over the left field wall, scoring Gaffney and Sims.

Brycen Goodlett grounded to second base but slipped on his way to first and was thrown out. Sam Baughman then hit a high ball to center field that was dropped allowing a double. McGinnis was walked and after Purdom was caught out in left field Hart was also walked. Seth and Aaron Caton took advantage of the opportunity as Seth singled over second base, scoring McGinnis and Baughman, and Aaron hit a three-run homer over the center field wall, giving the Titans a 5-4 lead.

Glasscock hit a homerun over the center field wall to tie the game at 5-5 in the top of the second, and the Titans couldn’t answer in their own at bat.