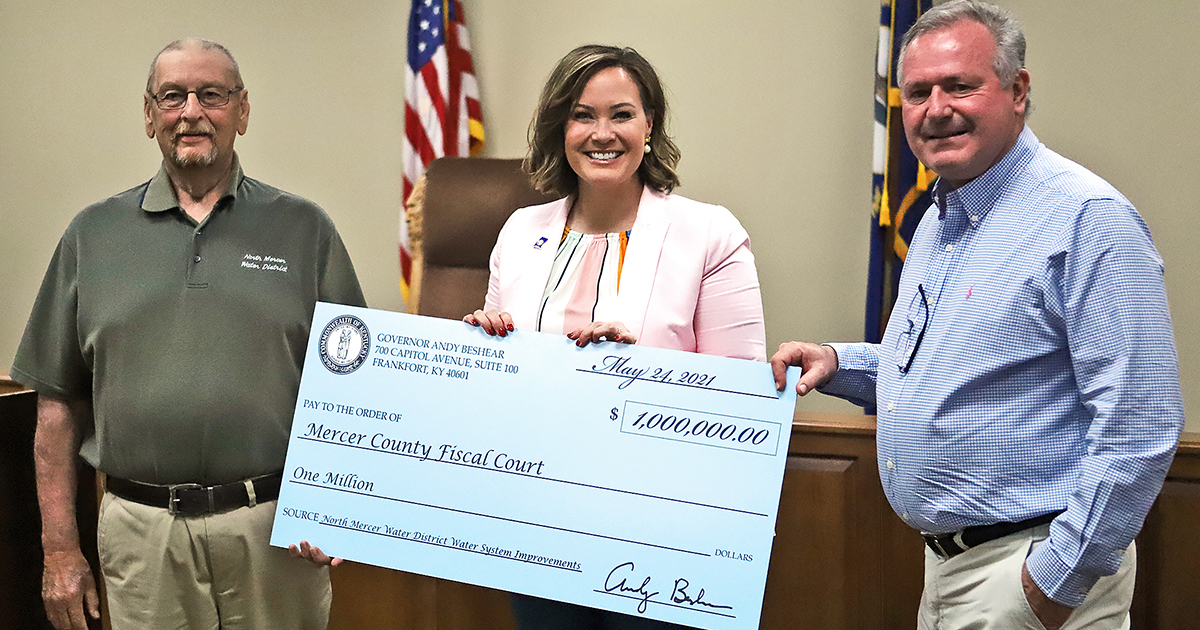 The project consists of replacing approximately 13 miles of water main pipes, which will improve the integrity of the system and protect against future breaks and service outages for 250 households. The district already received $3.4 million in loans from the United States Department of Agriculture Rural Development for the project.

“As a native Mercer Countian, it’s a true honor to be a part of this significant project in my home town,” said Lt. Gov. Coleman. “Clean drinking water is a basic human right, and the Beshear-Coleman administration is committed to protecting that right in rural Kentucky. A project of this size will have a dramatic effect on the quality of life in our community.”

The $1 million project, funded through the Department for Local Government, is part of the $250 million in federal funds from the American Rescue Plan Act the Beshear-Coleman administration has dedicated to water and sewer infrastructure improvements across the commonwealth.

The majority of the North Mercer County Water District System is between 40 and 50 years old and in desperate need of replacement. Since June 2016, the district has had 11 main line breaks within the project area, each resulting in the district issuing a Boil Water Advisory.

In addition to the 11 main line breaks, the district has experienced an additional 29 line breaks and 44 service line leaks or breaks in the area. Created in 1959, the water district serves approximately 4,600 customers in Mercer, Washington, Boyle and Anderson Counties. The water district is responsible for 400 miles of water lines, six pumping stations and five storage tanks.

“The positive impact to our community will be realized for years to come,” said Mischell Lee, general manager for North Mercer Water District. “This money will help pay for updates to our infrastructure that will benefit and provide water at an affordable rate to our customers.”

According to the state, the existing pipe is made up of problematic class 160 water main, approximately 52,800 linear feet of which is six inches in diameter while 9,200 feet is four inches. The replacement pipe will be PVC class 250 pipe.

The project will also include replacement of existing service lines to the 250 households that are affected by the water main replacement.

According to a press release, Gov. Andy Beshear and state lawmakers reached a bipartisan agreement during the 2021 regular session which will use nearly $1.3 billion to boost the state’s economy by expanding broadband, delivering clean drinking water and building new schools. The plan is expected to create more than 14,500 new jobs.

At the Mercer County Fiscal Court’s regular meeting on Tuesday, Judge Dedman said with the financing in place, the water district should start work soon.