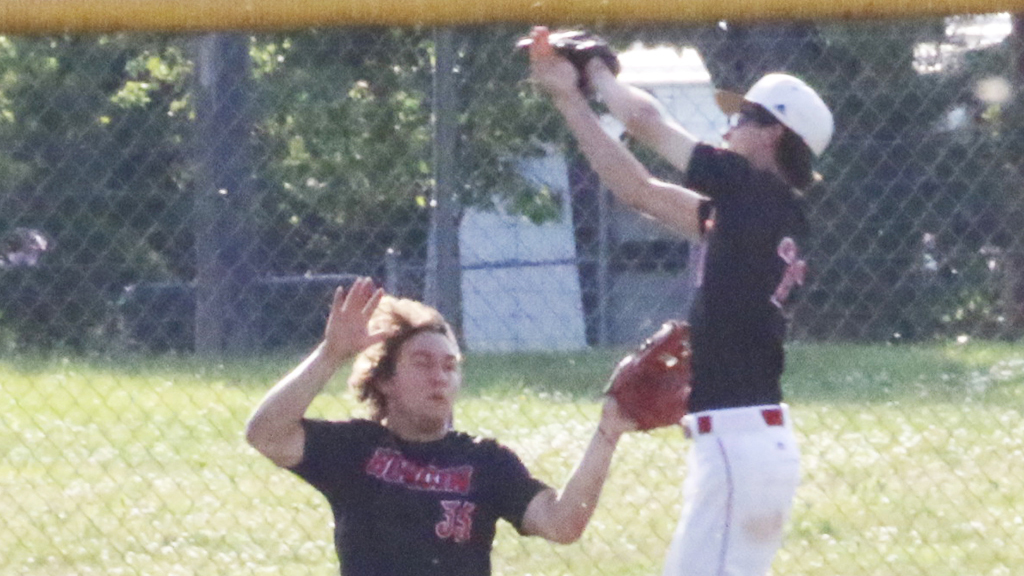 The Harrodsburg Herald/Doug Brown
Seniors Cameron Nagel (left) and Evan May (right) both went for a pop fly in Burgin’s game against West Jessamine. Nagel fell out of the way of May, who grabbed the out for the Bulldogs.

Herald Staff
sports@harrodsburgherald.com
The Burgin Bulldogs (13-11-1) played one of their final home games against the West Jessamine Colts (15-11) this past Wednesday, May 19, as the regular season nears its end.
West Jessamine pulled an early lead in the first inning with a flurry of heavy hitters and base steals. Sophomore Eli Newby collected the first out against West Jessamine after catching a fly ball in right field. The next two outs were collected back to back with sophomore pitcher Hunter Reed striking out one and freshman first baseman Aaron May tagging out the last batter. However, West Jessamine was able to score three runs during the inning, putting the Bulldogs at a disadvantage, which was increased after West Jessamine struck out the first two Bulldog batters and tagged out the third.
The Bulldogs retaliated in the second inning by halting West Jessamine’s advance completely. Reed found his sweet spot and struck out two batters, striking the first out swinging and the second looking. Newby caught a fly ball to right field in between strikeouts for the third out of the inning. The Bulldogs began to make contact with the ball at the bottom of the second inning, but aside from Newby, who singled on a fly ball, no batters made it on base.