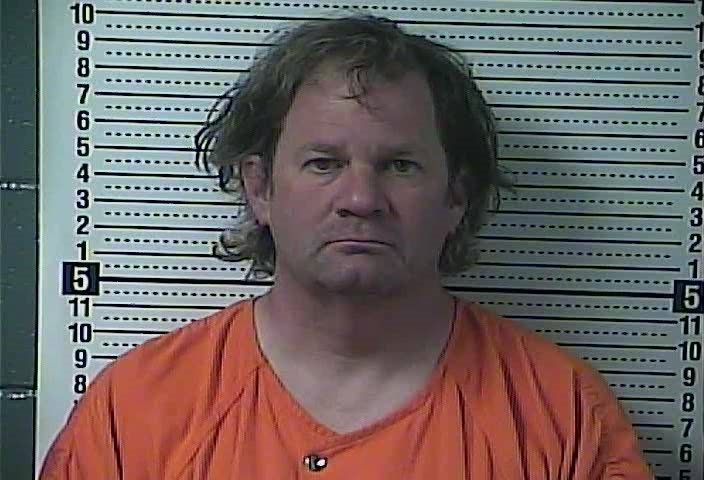 Andrew Miner, a handyman better known as ‘Handy Andy,” was arrested this weekend and charged with three counts of 3rd-degree criminal mischief. Miner was released on his own recognizance. (Image: Boyle County Detention Center).

One of Harrodsburg’s most vocal proponents of law and order has run afoul of the law.

Andrew J. Miner, 48, a resident of Broadway Street better known as “Handy Andy,” was arrested this weekend and charged with intentionally dropping screws under the tires of two vehicles at 4 a.m. on Friday, May 14.
Miner, who has installed surveillance cameras on his property and has distributed pictures of people he claimed were drug dealers online and before the Harrodsburg City Commission, was identified in part to surveillance footage obtained from nearby utility poles, according to the complaint warrant.
Using that footage, officers from the Harrodsburg Police Department were able to track Miner’s blue Dodge Durango driving through town before parking on West Office Street. The officers were able to confirm the vehicle was Miner’s because stickers on the vehicle in the footage matched stickers on Miner’s Dodge Durango, according to the warrant.
Miner got out of the vehicle, walked towards Clark Street, and according to the complaint, did something to the tires of two vehicles before leaving.
The victim, who also claimed to have video footage of Miner placing screws under the vehicles’ tires, told police she’d paid $117 to fix a tire.
HPD Patrolman Blake Darland questioned Miner about his whereabouts at that time.
“He was unable to tell us where he was,” Darland wrote in the complaint.
Miner invited Darland to look at his surveillance footage to see if his vehicle was at his house at the time of the incident. According to the complaint, when they looked at the footage “his vehicle was not located at his residence at the time that the incident had occurred.” Miner said he often drove around at night “due to a sleep disorder” but was unable to say where he was at the time of the incident, according to the complaint.
Miner continues to deny he had anything to do with the incident.
“It’s not me,” Miner said Tuesday. “I assure you with 100-percent confidence that it wasn’t me.”
Minor claims he noticed his vehicle had been moved lately, but said he didn’t think anything of it. He said he believes someone else drove his Dodge Durango that night.
“Whoever came out of that vehicle is not me,” Miner insisted, saying he had been the victim of a conspiracy.
“The drug dealers don’t like me,” Miner said.