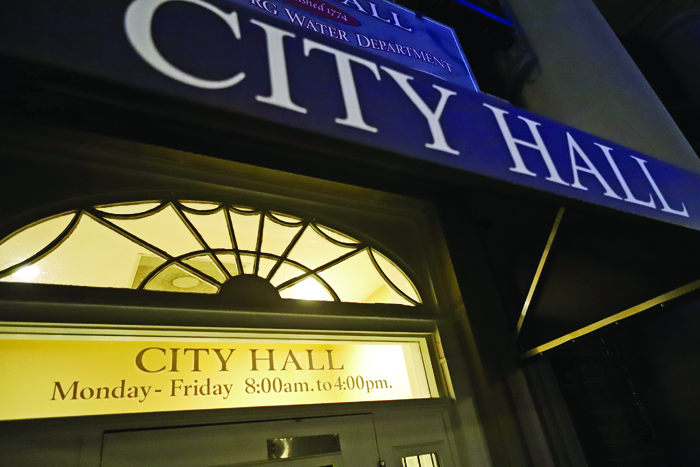 The Harrodsburg Board of Commissioners enacted an ordinance clarifying how the city goes about razing properties considered to be abandoned at their regular meeting Monday night. They also got a reminder that behind nearly every so-called dilapidated house there is a human being with a story to tell.

The commissioners  heard from Michael Vah, who lived in a house on Tabler Avenue. Vah told the board he was kicked out of his home during a period when he was dealing with several different problems, including the deaths of loved ones and medical issues.

“I miss having my house,” Vah told the commission. “It kept me strong.”

City officials said Vah’s property had been condemned for a variety of issues, including lack of electric, sewer and water.

He said he had been harassed by the code enforcement officer. Vah questioned why his home had been singled out.

“My house is surrounded by vacant houses,” he said. He said one nearby house is full of vultures and snakes.

Vah said he had been left homeless and without a vehicle. While he was trying to get back on his feet, someone stole his belongings. “I lost everything,”  he said.

Vah said he never received police reports on property that was stolen, including a pickup truck, and was unable to file insurance claims.

He said he still had belongings at the site, including his son’s ashes, that he wished to recover. He said he had been unable to find help to remove the personal items.

“I did the best I could, but I couldn’t get everything,” Vah said.

Asked if he would be interested in selling the property so the city could finish demolition, Vah said, “I don’t know.”

Pressed to transfer ownership of the property to the city, Vah did say he wanted something for the property, but declined to give a price. He said he is in a position now where he can afford to have work done on the house.

“I like you. I’ve known you a long time,” Freeman told Vah. The mayor advised him not to sink his money in a house that wasn’t going to be worth anything when he was finished.

He gave Vah several options: Vah could deed the property to the city, and they would take care of it, selling it at public auction or deeding it back to him, or he could give them permission to clean up the property.

Freeman asked Vah to contact City Attorney David Taylor and reminded him that Taylor would be representing the city, not Vah.

Commissioner Isham asked when the city was going to finish cleaning up the site.

Albert Moore, director of public works, said he needed approval before work could be finished. While Vah insisted there was no lien against the property, Commissioner Billy Whitenack questioned the city’s legal right to proceed. Whitenack, the former chief of the Harrodsburg Police Department, said without a court order, city officials should not go on anyone’s property.

The commissioners also gave second reading to ordinance 2021-06, which governs how the city razes properties that have been deemed abandoned. They voted unanimously to approve the ordinance, which considers properties “abandoned” or “vacant” for 45 or more consecutive days. At that point, the city may acquire the property either through judicial act or by a transfer from the property owner. Once the city has the title, they will “clean, demolish and raze” the property to the standards considered to be safe. At the suggestion of Commissioner Adam Johnson, this work will be bid out, but if the city can do it cheaper, they can reject the bids and do it themselves. To be reimbursed for expenses, the property will be sold in a public auction through a Mercer County realtor.

“We’re going to stand by this?” asked Commissioner Marvin “Bubby” Isham before the vote. Isham said the commission had previously passed a resolution specifying owners of abandoned properties—many of which are owned by banks and other institutions—would be fined $100 a day for every day they allowed their properties to remain substandard. Isham said the city hadn’t fined delinquent property owners since the resolution had passed.

City Clerk Shavonna Huffman said once the property was sold, there was seldom any money left to satisfy fines and other costs, especially if there was a mortgage. Under the law, mortgage holders get paid first, said Huffman, who said once the mortgage is paid off there is little money left.

“We’ve done all the work for nothing,” Huffman said.