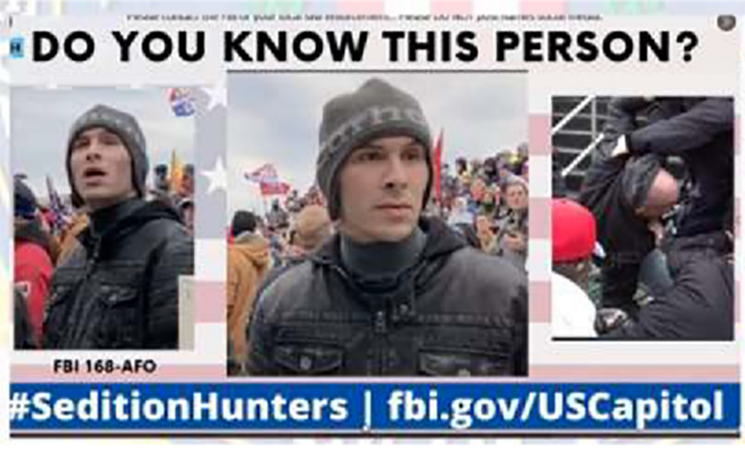 Image: FBI
Stephen Chase Randolph, pictured above, was arrested for allegedly participating in the Jan. 6 attack on the U.S. Capitol. Federal agents were able to track him down thanks to social media posts.

A Mercer County man told undercover federal agents that assaulting the U.S. Capitol on Jan. 6 was “fun,” according to court documents.

Stephen Chase Randolph was arrested by FBI agents last Tuesday. But federal authorities had been after him for months. According to a statement of facts filed by the FBI, undercover agents visited Chase at his place of work on April 13.

The FBI was able to track down Randolph because of his clothes and his online history. On images of the Jan. 6 attack, agents described him as wearing a grey Carhartt toboggan, a black jacket with a breast pocket on each side and stitching detail on each sleeve, a grey turtleneck, black gloves with a red stripe, and jeans. Agents found the pictures on a Twitter page called Sedition Hunters, and were able to match the clothes he was wearing with photos already in the FBI’s possession as well as publicly available videos of the attack.

Using an open source facial comparison tool, the FBI were able to match those images with images from an Instagram account which apparently belonged to Randolph’s girlfriend as well as other social media accounts.

When the FBI photographed Randolph standing outside his workplace on March 3, he was wearing the same hat he’d been pictured wearing on Jan. 16, according to the court documents.

On April 13, two undercover FBI agents recorded a conversation with Randolph, in which he admitted “attending the riots at the U.S. Capitol” according to the statement of facts. Randolph told the agents he left former President Donald Trump’s speech early to go to the Capitol.

According to federal investigators, Randolph said he was there for approximately five minutes before “s**t went crazy.” He is quoted as telling agents he was standing near people who were throwing items at the U.S. Capitol police.

Randolph is quoted as telling the undercover agents that he witnessed a female police officer get pushed over and that her head bounced off the handrails by the stairs. According to the court documents, Randolph said he believed the female police officer had suffered a concussion “because she was curled up in the fetal position after being pushed to the ground.”

In video of the attack, federal agents said Randolph can be seen outside the Capitol “violently pushing and pulling the barricades until the crowd successfully pushed the barricades down on top of the officers.”

On Tuesday, April 20, FBI agents executed a federal search warrant at a house on East Lexington Street. Randolph was arrested on charges including assaulting, resisting or impeding an officer causing bodily injury; obstruction of law enforcement during a civil disorder; and obstruction of justice/Congress.

Randolph is one of more than a dozen Kentucky residents to have been taken into federal custody over their  alleged involvement in the Capitol assault. So far, over 400 people have been arrested.

The FBI is accepting tips and digital media depicting rioting and violence in the U.S. Capitol building and surrounding area in Washington, D.C., on Jan. 6.

Any relevant information, photos, or videos can be submitted at fbi.gov/USCapitol.