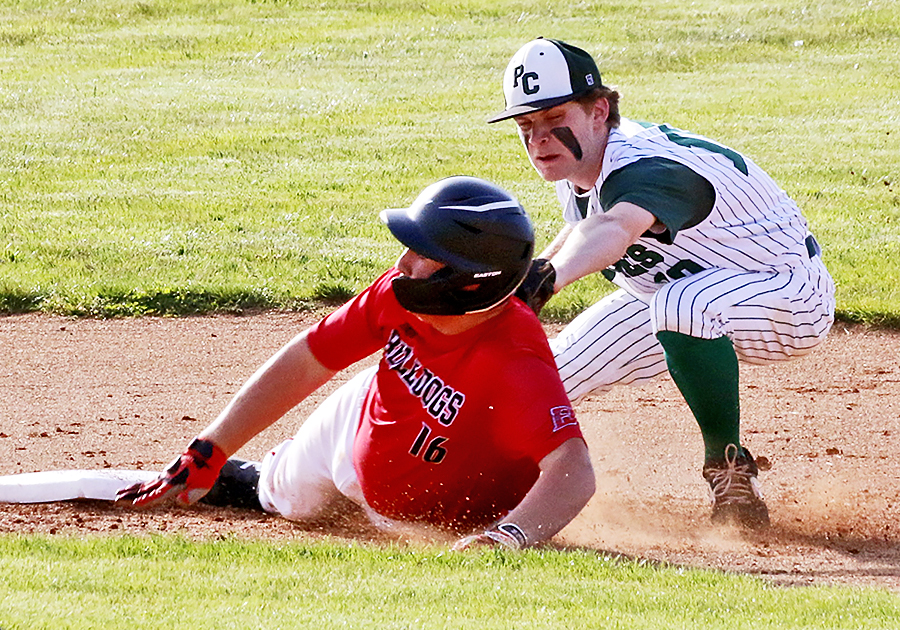 The Harrodsburg Herald/Doug Brown Noah Broce was safe at second base Monday night in Burgin’s win over the Caverna Colonels.

Herald Staff
sports@harrodsburgherald.com
The Burgin Bulldogs (5-8) triumphed over the Caverna Colonels (0-8) Thursday, April 22 on their senior night. It was the Bulldog’s fourth win of the season.
The first inning was action packed for the Bulldogs, with a total of seven runs made. Sophomore Jacob Qualls scored the first run for Burgin after two errors sent him to second base, where Sophomore Hunter Reed then batted him in. Reed wasn’t far behind and scored after Sophomore Noah Broce batted him in. Broce made it home shortly after that, when two passed balls sent him from second base to home plate. Senior Jackson Qualls hit a triple run while also batting in freshman Aaron May for the fourth run of the game. Eighth Grader Marshall Hart and senior Cameron Nagel were then walked back to back, loading the bases. Another walk, this time for Jacob Qualls, sent Jackson Qualls home. Hart soon made it home as well with an RBI from Reed. Nagel scored the last run of the inning by stealing home.

For the rest of the story, including game stats, check out this week’s edition of the Harrodsburg Herald. Click here to subscribe to the online version.