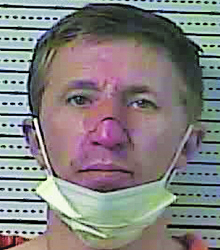 A local man has been indicted for trying to break into a Mercer County home on New Year’s Day.

According to the sheriff’s office, Michael Wayne Tyler, 42, of Harrodsburg, used a small table to break the glass in the front door of a home on Irish Ridge Road.

Tyler did not know the homeowner, Dep. Wes Gaddis (MCSO) told the Harrodsburg Herald last year. Gaddis said Tyler, who appeared to be intoxicated, claimed people were after him and said he was trying to find somewhere to hide.

Last week, Tyler was indicted for 1st-degree criminal mischief, a class D felony, and 2nd-degree criminal attempt to commit burglary, a class A misdemeanor. According to the indictment handed up by the Mercer County Grand Jury, Tyler caused more than $1,000 in damage to the victim’s property.

His bond was set at $5,000. Dep. Gaddis testified at the grand jury hearing.

Tyler is next scheduled to appear in court on Tuesday, May 11, at 1:30 p.m. He is currently serving out a sentence at Boyle County Detention Center.

For the rest of the indictments, check out this week’s edition of the Harrodsburg Herald. Click here to subscribe to the online version.