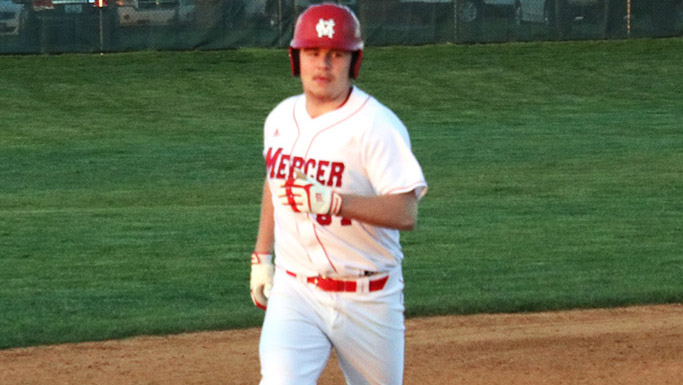 The Mercer County Titans (5-4) pulled off a huge win in the final inning Monday night against the Henry Clay Blue Devils (4-3). The Titans were down 13-11 in the bottom of the seventh inning when senior Caleb Purdom hit a grand slam.

Both offenses were strong at the plate as the Titans collected 11 total hits and the Blue Devils had 15 hits. Henry Clay led the first inning after a single on a 1-2 count by senior Clay Momeyer.

After the Devils scored two more in the top of the second, the Titans woke up and answered with two of their own. Henry Clay scored two runs on a single up the middle by senior Parker Henderson.

Mercer started the second inning with a runner on base. Senior Sam Baughman tripled on a 2-2 count, scoring one run. Baughman was brought home when Rylan Southworth singled, adding another run.

Head Coach Cody Christopher believes the Titans can compete with anyone in the state after beating the 17th ranked Blue Devils. “It shows them that they have the talent to compete with anyone in the state,” he said. “They’re not used to playing the 11th region teams and a couple good wins here recently puts a realization in their eyes that we can compete and win any game we play.”

Despite a couple of tough games the week before, Christopher said he likes where the Titans are right now.

“We are starting to see the team we knew that they could be,” he said.

Henry Clay scored five runs in the fifth inning, including four homeruns. The Titans were not discouraged and scored 10 runs and five hits over three and a third innings.

The Titans won in walk-off fashion thanks to senior Caleb Purdom, who launched a missile over the left centerfield fence with the bases loaded. For the night, Rylan Southworth led the Titans with three hits on four at-bats.

The Titans move to 5-4 and played on the road at East Jessamine Tuesday night. They will play Lexington Catholic under the lights Friday night at Amos Black Field.

For the rest of the story, check out this week’s issue of the Harrodsburg Herald or click here to subscribe to the online version.