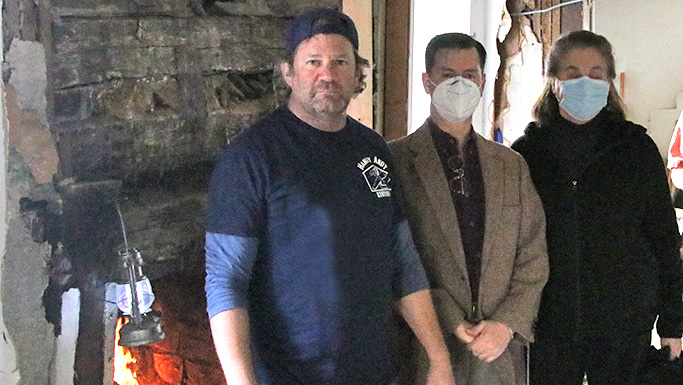 The Harrodsburg Herald/Jennifer Marsh
Pictured above: Andy Minor stands in front of his cabin fire place with Jerry Sampson and Amalie Preston.

A simple house remodel turned into a historic preservation for local resident Andy Minor, after he purchased a house on West Broadway Street.

“I found a one room wood cabin hidden inside this house,” said Minor. “I found the name, James Carter, written on wood over the fireplace and tried to research it.”

Minor said he needed to get historians involved to help him navigate what to do next.

“Cabin logs were originally round, these are not so it would make sense if this cabin was built in the early 1800s,” said Kelsay,

From the house’s location Preston was able to look at the original plats of Harrodsburg.

“It looks to be positioned on plats 9-12. These originally belonged to the Poague family, deeded in 1814,” said Preston. “Mr. Minor did the exact right thing going to research the deeds at the clerk’s office because that is how it is done.”

Minor said he was able to trace deeds back to 1805. Preston said it is possible for Minor to have gone back further than the records she possesses.

Preston, Sampson, Dedman and Kelsay all agreed on the estimated date of the cabin but noted the verification would take time.