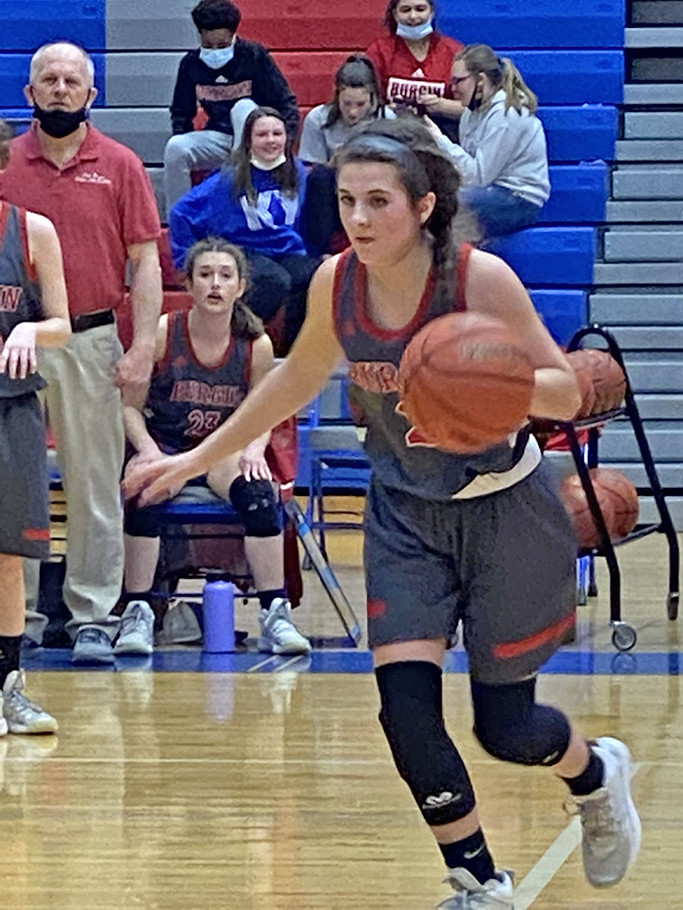 The Harrodsburg Herald/April Ellis
Sophomore Baleigh Turner made a move to the basket in the first round of the girl’s 46th district tournament on Tuesday.

The Burgin Lady Bulldogs (4-13) faced the West Jessamine Lady Colts (4-12) Tuesday night in the first round of the girl’s 46th district play hosted by Mercer County Senior High. Both teams were even behind the arc, hitting seven 3-point shots, but the Lady Bulldogs struggled with West’s inside game and ended their season, 76-46.

Grace Cocanougher had a great steal on a West inbound play and added two quick points for Burgin, 5-4, and regained the lead. For the next few minutes it rained threes, West hit two and Thompson hit one for the Lady Bulldogs, 14-8.

With seconds left in the quarter the Lady Bulldogs couldn’t find the bottom of the net and trailed, 16-8.

West went on an eight point scoring run to start the second quarter, 24-8. Three minutes in, Thompson scored for Burgin from the foul line and that was the jolt the Lady Bulldogs needed. They scored seven straight points, four from Avery Gray and a three-point shot from Cocanougher. Burgin worked to close the gap, 30-15. With two minutes left in the first half, Ellie Jenkins hit another shot, but the momentum swayed back to West. The Lady Colts led going into halftime, 37-17.