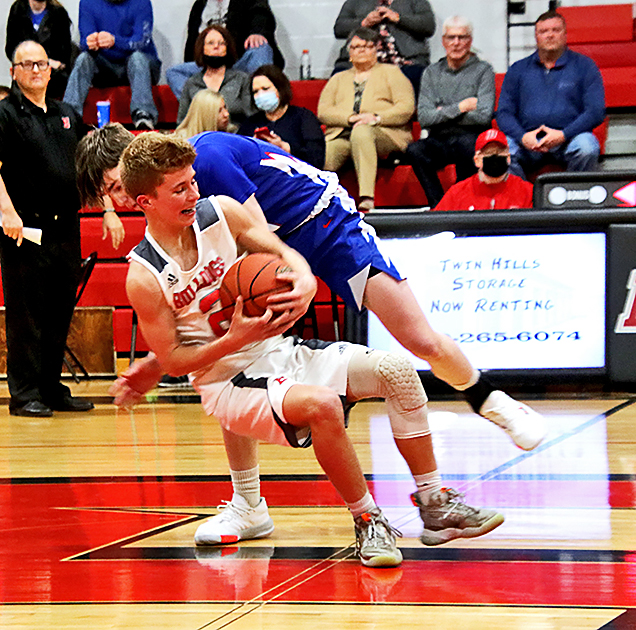 The Harrodsburg Herald/Riley Johnson
Sophmore Jacob Qualls had an altercation with an Eminence player during the senior night game. Parents were escorted from the gym after Eminence was called for the foul.

It was senior night for the Burgin Bulldogs boys basketball team, who played against the Eminence Warriors  (6-19) last Tuesday night at home. Unfortunately, the Bulldogs lost a close game, 55-53.

“Free throws killed us,” said Burgin senior Jackson Qualls after the game. “We were eight for 15 on our shots but they were a good team and we want to see them again out on the court.”

Both teams were evenly matched in the first quarter, with the score tied at 9-9 in the first eight minutes. Coach Troy Lee Thomas called a timeout at 6:40 to try and find a way to take the lead.

Things picked up in the second quarter, with the Bulldogs jumping to 26 points and the Warriors jumping 30 points in just eight minutes. At halftime, Burgin had four fouls while their opponents had six. Eminence’s Josh Ruzankq would finish the night with four fouls.

In the third quarter, Ruzankq had an altercation with Burgin’s Jacob Qualls and a technical foul was called.