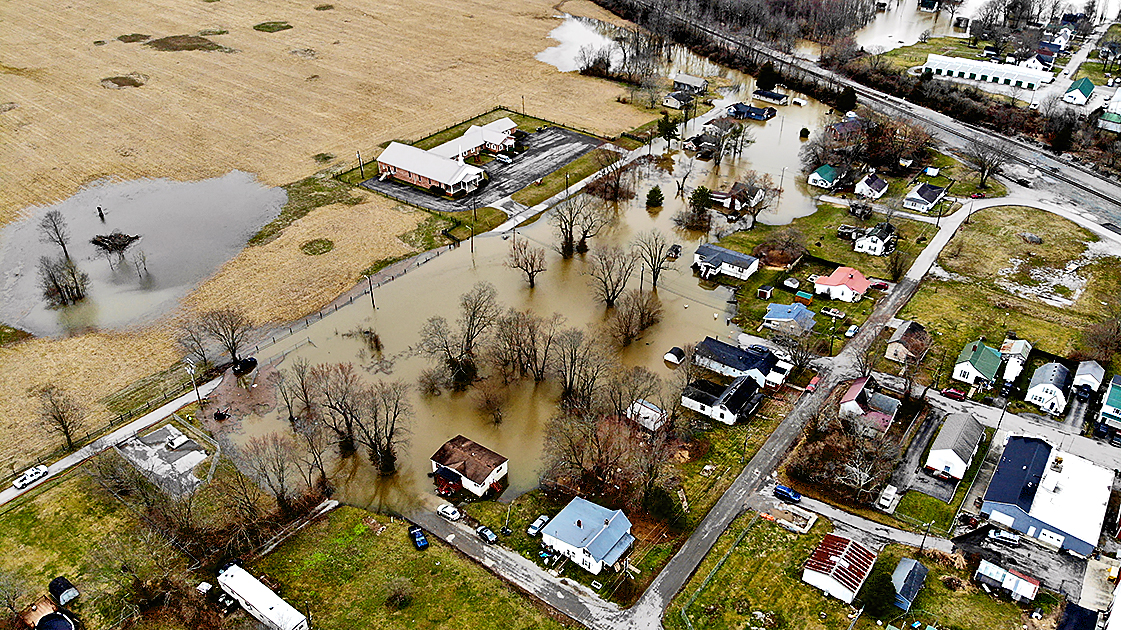 Burgin Mayor Jim Caldwell is asking for the public’s patience while the city deals with flooding. The underground cave system that the city has relied upon for drainage for decades was overwhelmed when hit by an ice storm and torrential rains in the space of a few weeks. (Drone photography by Doug Rulon).

Burgin citizens voiced their concerns about flooding in the area along Water Street at last week’s city council meeting. The council also adopted a new building code enforcement ordinance and discussed an issue with a city councilman’s water bill.

While there were technical problems with the pump the city purchased, Caldwell said there was absolutely nothing the city could have done to prevent the flooding. Much of the nation was hit by an ice storm which left millions of people without power here in Kentucky and across the country. Following that, Mercer County and much of the Commonwealth was hit with five inches of rain. Beattyville in Lee County was under more than seven feet of water after the storms.

Burgin has always relied on an underground cave system for drainage. While many residents blame blasting done during the construction of Burgin’s sewer system, Caldwell said the cave could not have handled the ice storm and the heavy rains.

The mayor said the city is trying to address the issue, but the solutions are too expensive for Burgin to handle alone.

“We’re trying to get federal funding, but it’s a $3 million fix and we don’t have $3 million,” Caldwell said. “I promise you we’re doing the best we can do.”

One issue that has held up any possible federal and state funding is that Burgin has been behind on their audits. At one point, the state was withholding over $112,000 in road paving funds due to delinquent audits.

As soon as the audit is complete, Burgin will be eligible for grants to help with flooding, officials say. But even then, Caldwell said it would not be a fast process.

The mayor said each flood costs the city up to $2,500 in fuel and wages. He  said previous floods cost $25,000 because the city did not own a pump. Caldwell said the pump the city had purchased was the biggest they could afford. Buying a bigger pump would be even more expensive, he said.

“It’s not the best solution, but it’s the best we could afford,” Caldwell said.

Caldwell said that would take a lawsuit and he didn’t see the point in spending 10 years in court with the sanitation district.

“I don’t see getting any relief out of them,” the mayor said.

In other business the Burgin City Council adopted a new ordinance that would create a code enforcement board to address Burgin’s dilapidated buildings.

Some residents have objected to the proposed ordinance, calling it persecution. “I hate this ordinance like poison,” Mayor Caldwell said. He said the city already has ordinances on the books to handle the issue.

“Why don’t we do something about these houses?” asked Commissioner Jamie Keebortz. “They’re bringing down property values.”

Caldwell said nothing in the proposed ordinance would change the situation. Caldwell, who was Burgin’s chief of police before being elected mayor, said he had taken a violator to district court, who had been fined $30,000.

Morgain Patterson, director of municipal law with the Kentucky League of Cities, said defendants could appeal the fine to an independent code enforcement board, which would take the political pressure off the city council. Then they could sue in district court. Patterson, who attended the meeting virtually, said the fines and fees would go to the city instead of the court.

She said the ordinance would allow the city to place a lien against properties.

Patterson said the system would move more quickly than by acting through the court. She said most cities have gone to the code enforcement board model. She said it had been effective in handling the issue of blighted and abandoned properties.

Caldwell said the problem with most of the properties is no one knows who owns them anymore. The original homeowners have died and the properties have so little tax value the heirs are no longer receiving tax bills. He called the code enforcement board “morally reprehensible.”

However, Dunn, who said dilapidated properties have been a problem for as long as he’s served on the city council, moved to adopt the ordinance. Keebortz seconded the motion, which passed with only Councilman David Caldwell voting against it.