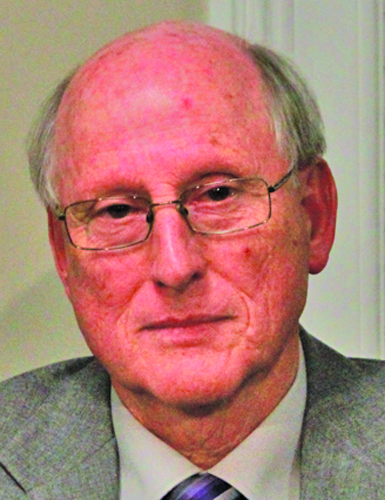 A former city commissioner is questioning the Harrodsburg City Commission’s most recent appointment.

Last week, the city commission picked Adam Johnson to replace former Commissioner Scott Moseley, who resigned after receiving a promotion with the Kentucky Department of Insurance. Johnson, a Harrodsburg resident who currently serves as senior executive officer with Monticello Banking Company in Danville, was one of seven applicants for the open seat. He was unanimously elected to replace Moseley at a special-called meeting.

At Monday night’s regular meeting, former Comissioner Charlie Mattingly said he and other citizens are concerned about how Johnson was appointed. Mattingly, who did not run for reelection last year, said the other applicants should have been interviewed before a decision was made. He asked City Attorney David Taylor to check into any possible favoritism or potential conflict of interest.

“Why didn’t the commission interview these people?” Mattingly asked.

Commissioner Billy Whitenack said the commission was following policies laid out by the Kentucky League of Cities and state law. Whitenack, who was acting as mayor pro tem  Monday night while Mayor Art Freeman is away for medical treatment, said the city commission interviewed no one back in 2018, when they appointed Kerry Anness to replace Jack Coleman on the city commission. They hadn’t even accepted applications. Nor were they required to under state law, he said.

“We don’t have to interview anybody,” Whitenack said.

Mattingly said he had voted against appointing Anness.

“There were seven good citizens that I think should have been interviewed,” he said. Mattingly said he believed there had been favoritism.

Whitenack, who was formerly the chief of the Harrodsburg Police Department, denied being in business with Johnson. Whitenack and the other city commissioners insisted they had followed the law.

“It’s not set in stone,” Mattingly said. He said out of respect for the citizens, all applicants should have been interviewed regardless of state law. He said the commission should take a different approach the next time.

“The law said it is up to the commission,” said Mayor Freeman, who attended the meeting virtually. Freeman noted that if the commission had not made an appointment within 30 days of Moseley’s resignation, under state law, Gov. Andy Beshear would make the appointment instead.

“It’s up to us to appoint somebody,” the mayor said. “I think we did the right thing for the right reasons.”

Freeman, who is currently undergoing treatment for cancer, said the commission may have to fill another slot soon.

Mattingly insisted they should have conducted face-to-face interviews with all the applicants before making an appointment.

“That’s what you should do for the citizens,” Mattingly said.

Freeman insisted there was nothing illegal about the procedure followed by the commission in replacing Moseley, and said he respected Mattingly’s input.

“We respect your beliefs,” Freeman said. “We appreciate your opinion.”

Later in the meeting, the commission voted to accept Johnson’s resignation from the Mercer County Board of Adjustments and Appeals, where he served as chairman, and appointed Jonathan Elliott to fill out the rest of Johnson’s term, which expires June 30, 2024.

The next city commission meeting will be Monday, March 22, at 6 p.m.