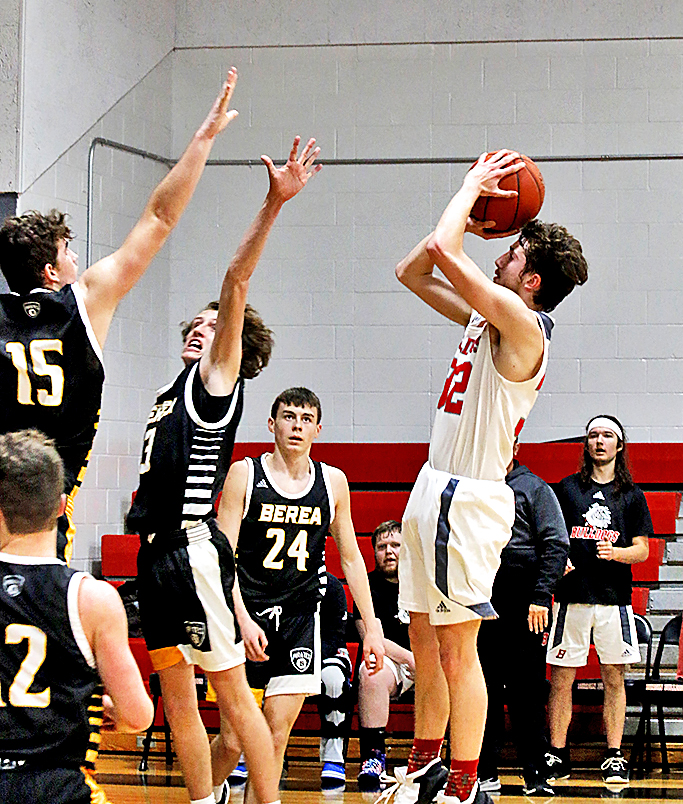 The Harrodsburg Herald/ April Ellis
Burgin’s John Boursaw was clutch behind the arc in Burgin’s win over Berea. Boursaw had 11 points for the game.

The Burgin Bulldogs played the Berea Pirates at home, Monday, March 1. The admission price of $5 was worth every penny. The Bulldogs narrowly pulled out the victory, 39-35, in the last two minutes when fans and players were ejected from the game and the Bulldogs clinched it from the foul line.

“I look at it as it was a test for them, to see if they could find a way to win,” said Burgin Head Coach Troy Thomas. “I have found over the years, you have to find a way to win, but you also have to have a will to find the way, and they had that will tonight. I’m happy my team got this win, the boys deserved it.”

The Bulldogs came out with strong defense but struggled to get a good shot off. Burgin’s first points of the quarter came with only 1:36 left to play when Hunter Reed hit a three-pointer, 6-3. Berea senior Jaylen Dorsey added his second basket of the game and extended the Pirates’ lead, 8-3. Greyson Mitchell sank both of his foul shots to close the gap and with only seconds left in the quarter John Boursaw busted a trey to tie it up, 8-8.

Greyson Mitchell picked up his second foul just seconds into the second quarter. After he blocked a shot hard, Mitchell headed to the bench to keep out of foul trouble. Jacob Qualls hit a three-pointer to give Burgin their first lead of the game, 11-8. Down two with under a minute to play in the first half, Mitchell came back into the game to rebound at the foul line in hopes to getting a shot off and tying up the game, but things didn’t go as planned. Mitchell fouled Dorsey and sent him to the line again. He picked up his fourth foul on a rebound from the previous play. Burgin had the ball back with less than 30 seconds but couldn’t find the bottom of the net and trailed at the half, 18-12.

Coming out of halftime, the Bulldogs intensified their defense and kept Berea off the rim. Reed and Boursaw hit back to back three-point shots to give Burgin their first lead of the game, 20-18. Dorsey, Berea’s leading scorer with 15 points, wouldn’t go away and put his team back in the lead, 23-22, with under 30 seconds left in the third quarter.

The fourth quarter was action-packed as Burgin’s little gym pounded with cheers and jeers from fans on both sides.

Reed hit a basket in the immediate seconds of the fourth quarter and Burgin wouldn’t score again until four minutes later when he hit two foul shots and made it a one point game, 27-26. Mitchell tied the game up, 28-28, and from there the game went wild.

To learn how wild it got, check out this week’s edition of the Harrodsburg Herald or subscribe to the online edition.