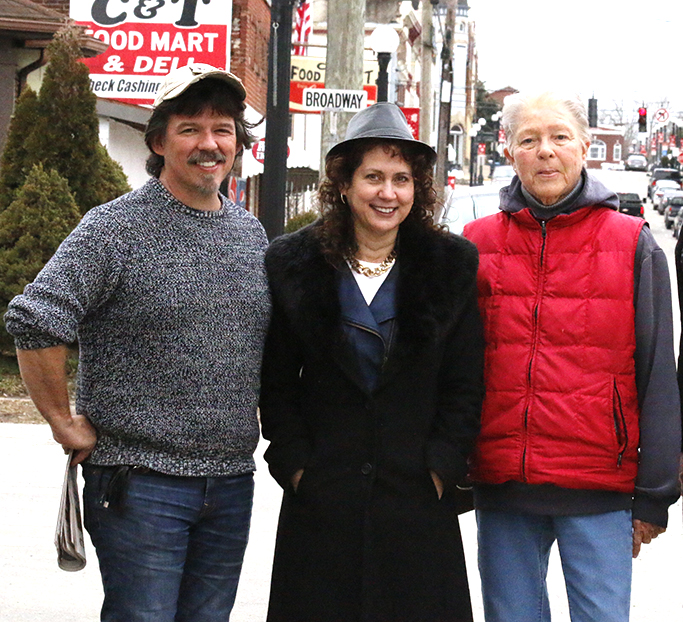 The Harrodsburg Herald/Jennifer Marsh
Todd Matthews, Lynne Smelser and Anna Armstrong want to exhume the Dancing Lady of Graham Springs, who is supposedly buried at Young’s Park, to see if they can harvest her DNA. City officials have expressed their doubts.

Local historian Anna Armstrong said the legend of the Dancing Lady of Graham Springs is part of Harrodsburg’s identity. New developments in that legend, which dates back to the 1840s, have prompted two researchers to seek permission to exhume her remains.

Todd Matthews and Lynne Smelser, along with Armstrong, hope to establish enough interest, historical reference and funds to exhume the Dancing Lady and run her DNA through the ancestry databases.

Concern over whether or not an actual body resides in the grave has been voiced by Mayor Art Freeman during last week’s City Commissioners meeting along with, hesitation over the research team disturbing the park and concerns with sensationalism. Armstrong said she thinks the project is needed to find the truth from a historical perspective.

“This legend is something I grew up with,” said Armstrong. “I see these new developments as an opportunity to enhance the ending. Whether there is something inside the coffin it will only make the legend more interesting.”

Armstrong said she was curious not just as an archivist and historian but also as a citizen of Harrodsburg. In Armstrong’s opinion, the project is a necessary next step in research.

“We will never really know exactly what happened, but with new technology we can maybe positively identify her and that will lead us to new research,” said Armstrong. “I see this project as more of an archeological dig than a regular exhumation. No big machinery or destruction should be required.”

Armstrong said Dr. Graham, owner of the resort was known as a great showman and marketer.

“If we opened the coffin and found nothing there it would speak to Dr. Graham’s ability as a showman,” said Armstrong. “It would only be a dark spot on Harrodsburg if we didn’t allow the project.”

Matthews, who has been working cold cases in Kentucky since 1998 when he helped solve a 30-year-old mystery around a Jane Doe in Scott County, said the cost of exhuming would be very low.

“I’d suggest this would be a gentle hand dig. With the coroner’s nod the remains could be held in a small container at the local funeral home,” said Matthews. “The cost of this can be very low. The grave can be opened as easily as the Scott County case in 1998. The most recent fence and marker would be carefully held aside to preserve it as the stone is lifted away.”

Matthews said the Dancing Lady’s coffin is akin to a time capsule which has yet to be discovered. Matthews’ partner, Smelser, is making a documentary about the dancing lady’s legend.

“We would like the city’s cooperation and support. Being involved in the process allows the city to help control the narrative,” said Smelser.

The story is set in historical Graham Springs. Located in the heart of Mercer County, the mineral springs resort was called the mecca of Southern Society by Sallie E. Marshall Hardy as part of the American Historical Register published in 1895. The springs, known for their healing properties, were owned by Dr. Christopher Columbus Graham who established the resort in 1819 and it flourished until 1853.

Sewell was said to have fled her floundering husband in Tennessee. Smelser and her research found this widely accepted version of events to be untrue, by finding letters with confederate stamps dating to the mid-1860s to and from Molly Sewell.

Matthews has recently been joined by Lynne Smelser, Ph.D., a researcher, writer and scholar with a doctorate from Michigan State University who has dedicated herself to researching the incident surrounding the death.

Matthews and Smelser will attend the next city meeting to plead their case. The meeting is scheduled for Monday, March 8, via zoom at 6:30 p.m.