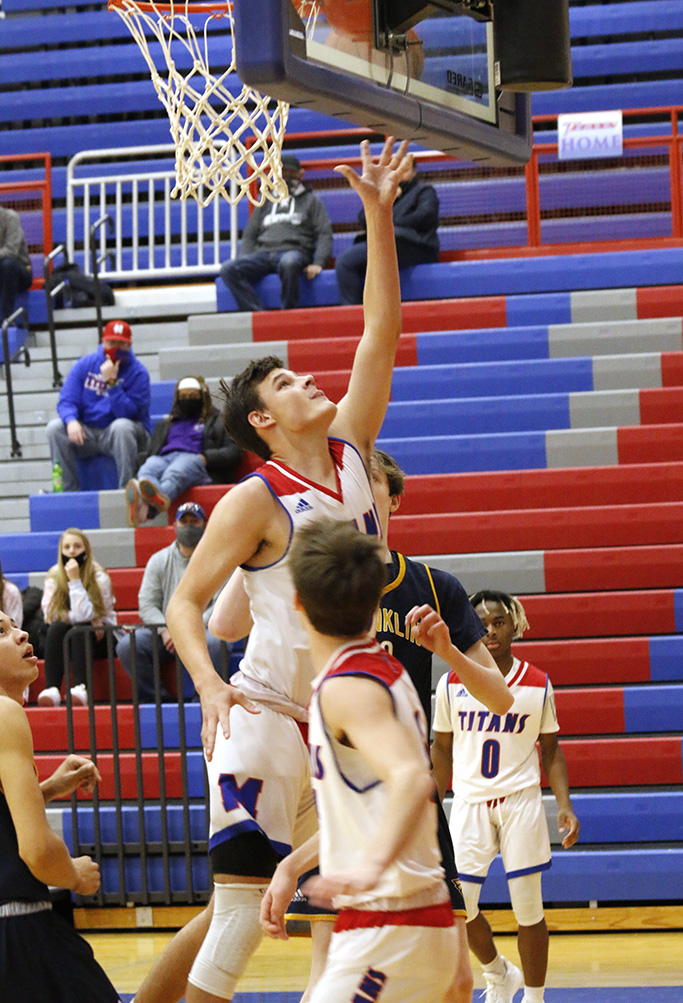 The Harrodsburg Herald/April Ellis
Sophomore Evan Hart made the bucket Saturday against the Franklin County Flyers.

After Mother Nature canceled a week’s worth of games and practice, the Mercer County Titans (5-5) were glad to get back on the court on Saturday, Feb. 20. The Titans defeated the Franklin County Flyers (8-6) with standout performances from sophomores Evan Hart and Thaddeus Mays.

“This was a really good win. Franklin County is in the 11th region and anytime you beat a team in the 11th region that’s a solid win. They are a well coached ball club and very experienced as far as athleticism goes,” said Mercer Boys Basketball Head Coach Josh Hamlin.

After a slow start, sophomore Seth Caton caught the Flyers out of rotation with a bounce pass to Hart to put the Titans on the board with an easy bucket. Senior Sam Baughman rebounded a missed foul shot and passed out to Mays, who hit junior Aaron Caton under the basket to tie the game 7-7 midway through the first quarter.

Hart tied it up again 9-9. When the Flyers extended their lead to five, Mays hit his first three-pointer of the game to cut the lead back to two. The Titans tied but weren’t able to take the lead and trailed at the end of the first quarter, 14-12.

At the beginning of the second quarter, the Flyers jumped out to a 17-12 lead, but the Titans got hot outside the arc. Mays hit back-to-back treys. Baughman added one as well, and the Titans took their first lead of the game, 21-17. Hart had a hard-fought put back to extend the Titans’ lead to six and Franklin called a timeout to halt Mercer’s momentum. The tactic worked and the Flyers fought back to cut the Titans’ lead to one, 29-28, at the end of the first half.