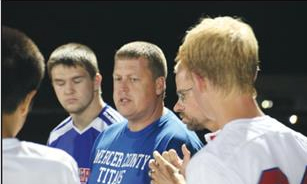 Mercer Coach Garrett Stark will be remembered not just for his influence on his players, but his impact on the community as well. The Harrodsburg Herald/Arpan Dixit

Garret Stark, seven-year head coach of the Mercer County Senior High School boys soccer team, passed away on  Tuesday, Feb. 9. Stark’s family and friends, the impact of his influence on those he coached and his dedication to the sport he loved are a few of the many ways he will be remembered.

No one knew Stark as well as his daughter, Taiylor Stark.

“Growing up, it was basically always the two of us, he was my best friend,” said Stark.

Taiylor remembers her father as a great friend to those that knew him, someone who was determined to take care of those who needed help.

On the soccer field, Stark changed the lives of everyone he coached or worked with. Since beginning his work at Mercer in 2014, the culture Stark created will forever be remembered by the Titan soccer family.

As athletic director at Mercer County Senior High School, Donald Wayne Smith has seen the impression that Stark made on players first-hand. Smith said Stark’s strength in community building is embodied through the alumni game that takes place each year. Former players from the boys and girls soccer teams gather for a game each off season.

“I look at things like that, look at how many people will come out and participate in that,” said Smith.

“It’s a big hole. He was in my opinion one of the best soccer coaches around. His record speaks for itself…He put soccer on the map for the Mercer County Titans.”

Stark accomplished more on the sidelines for Mercer County in his seven seasons of coaching than in all of the program’s history. Under his guidance, the Titans progressed each season until Mercer won three consecutive Region 12 titles in 2015, 2016 and 2017. In 2015 and 2016 the Titans went 42-7-3 while outscoring their opponents nearly six to one, allowing only 34 goals in 52 games.

Stark recently joined Campbellsville University-Harrodsburg as an assistant coach for their inaugural season. Many of his former players stayed in Harrodsburg to continue playing for him at the collegiate level. Two years ago, he co-founded Kentucky United Soccer Club with his best friend George Brown, head coach of the Lincoln County girls soccer team.

“Garrett and I met our freshman year of college at orientation the first day and we had a friendship that was a bond through soccer,” said Brown.

Having coached with Stark, Brown can speak to Stark’s genuine enjoyment in teaching the game and the inspiration he shared with everyone he worked with, especially those who played for him.

“I think it was because he genuinely cared,” Brown said. “He didn’t look at his players on a roster as a number, he loved the game. When you love the game, the game will love you back. Garrett truly loved the game. When you have a genuine heart and good intent, you’ve got faith in the dear Lord, it just comes natural. It’s all organic. His love for the game, his competitiveness and love for his players is what made him so special as a coach. It wasn’t just on the field it was off the field too.”