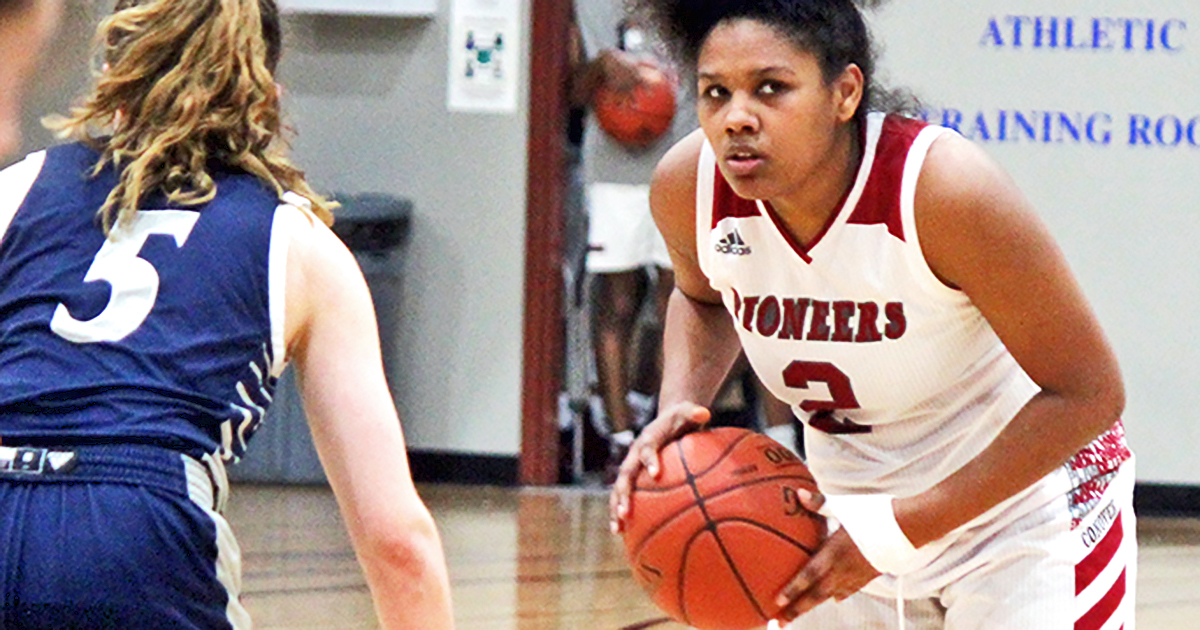 Saturday was Senior Day for the CU Harrodsburg Lady Pioneers. But it a junior stole the show.

Lady Pioneers guard Oriona Woods poured in 34 points, including a step back three pointer with two seconds left in overtime to lift CU Harrodsburg to a 77-74 win over Johnson University.

It was the second matchup between the two teams this season and the first quarter in both we’re nearly identical. In their January 27th game, the Lady Pioneers shot just 2/14 from the field and fell behind 22-7.

On Saturday, it was more of the same. The Lady Pioneers started off the first quarter shooting just 3/13. But unlike their first game, they were able to add additional points from the free throw line.

Despite the cold shooting first quarter—which at one point they trailed 13-2—the Lady Pioneers were able to close the frame on an 11-4 run and they trailed by only four points heading into the second. Coach Brian Tribble said part of that had to do with his defense.

“A team like Johnson (University) that can shoot the lights out we had to go to man (defense) to try and stop them from shooting a little more,” Tribble said.

And Woods kept the Lady Pioneers in it, as well. She scored 12 of the 13 first quarter Lady Pioneer points. Then added four more points in the second quarter to go into the halftime locker room with 16 as CU Harrodsburg trailed 30-26 at the break.

Then for a 15 minute stretch in the second half, it seemed as if the Lady Pioneers could do no wrong.

Senior E’moni Washington hit a three to begin the second half. Then two possessions later Woods hit a jump shot to give the Lady Pioneers their first lead of the basketball game.

They would surrender that lead but only for a brief second, after Jaiden Douthit hit a three pointer then Woods again hit another layup as CU Harrodsburg started off the third quarter on a 10-2 run. That run gave them a three point lead heading into the fourth quarter.

For the first six minutes of the fourth quarter it wasn’t Woods, but rather Makala Smith, that Johnson University had no answer for. The Lady Pioneer senior had two put back offensive rebounds and dominated the glass on her way to a 15 point, 12 rebound double-double.

“She is such an unselfish player. She’s okay with zero points and 10 rebounds. She would be okay if I brought her off the bench,” Tribble said. “Last year we voted her best teammate. This year, best teammate. Other girls want to play with someone like that. She’s just a selfless player and she’ll do the dirty work. She goes hard on both ends.”

But things would tighten up for the Lady Pioneers after they stretched their lead out to nine points courtesy of another Smith layup. Up 62-53, with 4:39 left, Johnson University used a 12-2 run to take the lead 65-64 with just 22 seconds left.

Woods would then make a layup to give her 27 points. Then the next possession Smith took over again, grabbing an offensive rebound, missing a put back, but then grabbing a second offensive board and converting a layup to give the Lady Pioneers a 68-65 lead with five seconds left.

Johnson University then called a timeout and with five seconds left. Following that timeout they got the ball to their leading scorer Tori Tessateskie. Tribble said the Lady Pioneers’ goal was to foul the Lady Royals and not let them get off a last second shot. Then he saw them come out in a stack set, so he opted to drop back and play defense. Tessateskie then hit a contested three at the buzzer to send the game into overtime.

“We should’ve went ahead and fouled on the inbound right away but I wanted to force a long three and, I’m not going to lie, that was a bad idea. She hit it in our face, she forced overtime but I told my girls this is why you get out of bed in the morning,” Tribble said.

And in overtime, it became the Oriona Woods show.