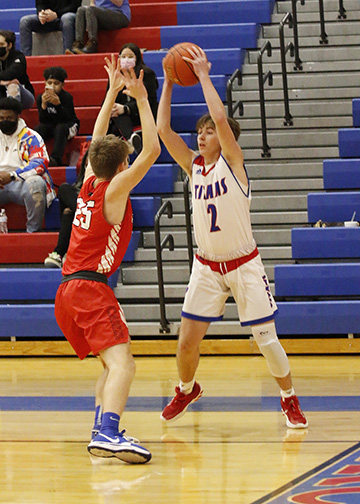 Mercer senior Sam Baughman looks to make a pass around a Nelson County defender in Saturday’s loss. Baughman had two points for the game. (The Harrodsburg Herald/April Ellis).

The Mercer County Titans (4-5) struggled to score Saturday afternoon in their 51-45 loss to the Nelson County Cardinals (5-13).

The past few weeks Mercer has struggled with foul shots, but Saturday’s game saw improvement with a 60 percent free throw percentage. However, during game play, the Titans couldn’t get the ball in the basket. They shot 34.6 percent in the first half and 39.3 percent in the second.

In the first quarter, junior Aaron Caton hit two foul shots to take the Titans’ first lead of the game 4-2. Nelson sophomore guard Lincoln Boone busted a three to take it right back. Junior Brayden Dunn drove to the basket to earn the Titan lead back, 6-5. Though they would tie the score up five more times, that was their last lead of the game. The first quarter ended with the Titans down by two, 14-12.

Caton came out the second quarter to gain two quick points. Caton, along with sophomore Evan Hart, lead the team’s scoring with eight points each. Dunn scored off an assist from Caton. At the 2:58 mark, Nelson jumped to a 22-16 lead and Head Coach Josh Hamlin called timeout to refocus his team before the half. After the timeout, sophomore Seth Caton added two more points to close the gap, 22-18. With 14.9 seconds left in the half, A. Caton disrupted the Cougar offense and Dunn was able to score when a ball was knocked loose, closing out the quarter, 20-24 Cardinals.