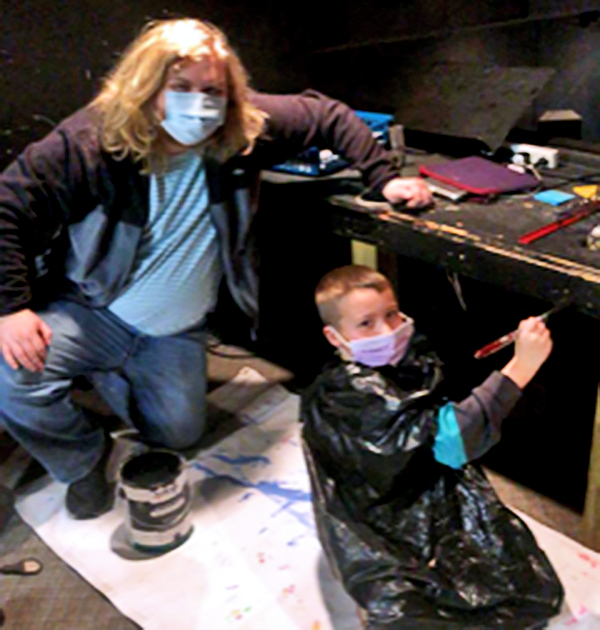 Even with the pandemic canceling much of the theatrical season, Ragged Edge Community Theatre has stayed busy. Managing Director Allan Barlow said they have completed building upgrades and they are now hosting theater camps.

“The theater camps have been a goal of mine since the day I took the job at Ragged Edge,” Barlow said. “We have one session right now, which meets Tuesday and Thursday afternoons through February. This session is called Build-a-Play.”

Students use improvisational games and acting exercises to construct a story with a beginning, middle and end.

“I try to tie it as close as I can to the language arts curriculum in our local schools,” Barlow said.

He hopes to continue the camps with sessions on mask work, stagecraft and Shakespeare for kids among others.

“We have started with one camp in the afternoon, but hope to grow eventually to four camps, two in the morning and two in the afternoon, at least one of which will be for older students ages 13-19,” said Barlow. “For the time being, the camps are limited to six kids per session.”

“The kids use the hand sanitizer station and we take their temperature as soon as they come in, and social distancing is enforced during their time in the theatre,” Barlow explained.

In addition to the camps, Ragged Edge has a new intern, Jacob Sanders. Sanders started the first week of January.

“At first I wasn’t sure I could come up with enough to keep an intern challenged and engaged,” said Barlow. “I have basically been the only person in the theater since the pandemic started and I was beginning to feel a bit like Tom Hanks in ‘Castaway’…except I didn’t have a volleyball.”

However, Sanders wasted no time in making himself useful.

“A week in, I was wondering how I ever got along without an intern,” Barlow said. He said he has learned just as much from the experience as Sanders and hopes to see him again at Ragged Edge this summer.

“We were able to complete a whole list of projects that would have been difficult working by myself. Whatever he didn’t know he was eager to learn,” said Barlow. “We touched on almost every facet of theater and play production from script evaluation and analysis to stage lighting and set design/construction.”

Sanders is a junior at Bennington College in Vermont, studying Japanese and drama. Bennington is known as a premier training program for those seeking a career in the theatre. Notable graduates include Peter Dinklage, Alan Arkin and Carol Channing among others.

“Though I go to school all the way up in New England, I have lived in Harrodsburg all my life. My mom, DeeDee, is a first grade teacher at Mercer Elementary. My dad, Lee, is a funeral director and part owner of Alexander and Royalty Funeral Home and my brother, Ryan, is studying for law school and working on music,” Jacob Sanders said. “Every year, as part of our graduation requirement, Bennington requires us to intern at a place of our choosing from January to mid February called a fieldwork term. Ideally, it is a place related to our major. Last year I taught Japanese at the Village School of North Bennington so this year I decided to work at a theater.”

For more information on the Ragged Edge Theatre Camps, call 734-2389.