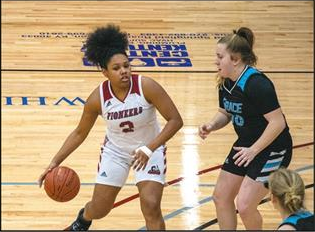 Despite losing eight consecutive games and getting off to a 1-8 start, Campbellsville University-Harrodsburg Lady Pioneers head coach Brian Tribble said his team was continuing to play hard. He also knew that as long as that trend continued, they would break out of the slump.

Slowed by a sluggish second quarter that saw the Lady Pioneers shoot only 3/24 from the field and trail by nine going into the half, CU Harrodsburg’s defense responded. They held Grace Christian to only 20 second half points to win their first game since January 16th.

It was also a game marred by injuries—five different times play was stopped to allow trainers to attend to an injured player. The first one happened early in the first quarter after Lady Pioneers starting point guard Alyssa Roberts went down with an ankle injury that kept her out of the remainder of the game.

Without their starting point guard, the Lady Pioneers hung tough, nearly matching the Grace Christian Lady Tigers shot for shot and trailed 20-19 after the first quarter.

But things got ugly for CU Harrodsburg in the second quarter.