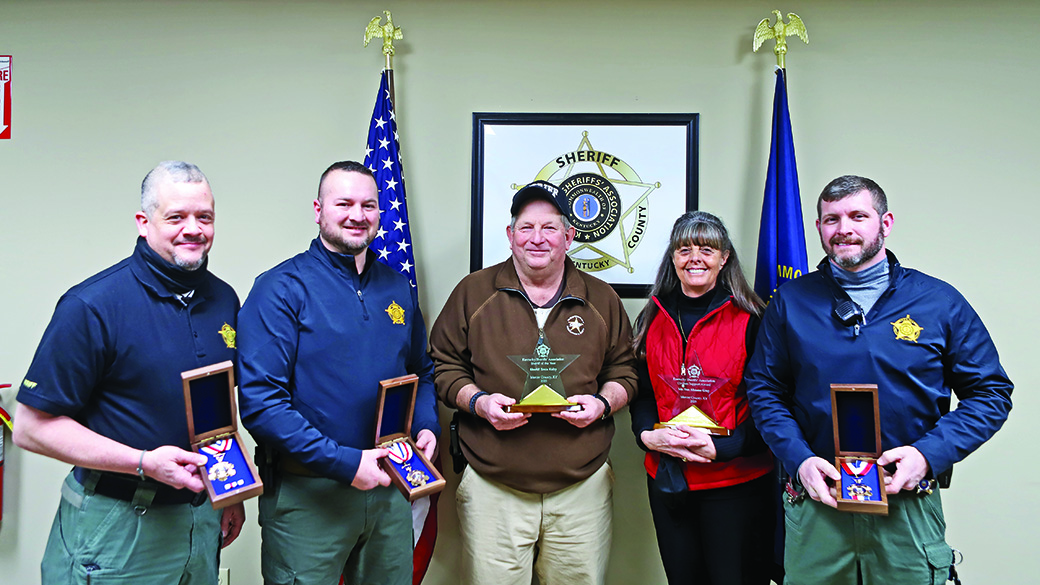 Sheriff Ernie Kelty has been named the 2020 Sheriff of the Year. In addition, the Kentucky Sheriffs’ Association presented Dep. Wes Gaddis with the Medal of Honor while Deputies David Prather and Sean Brown received Medals of Valor. Sue Abrams also received the Civilian Support Award.

Originally from Washington County, Kelty joined the Harrodsburg Police Department in 1984, where he served for 26 years. Kelty was elected sheriff in 2010.

“It’s the greatest honor I’ve ever received in my law enforcement career,” Kelty said. “I am just one person on the team. I accepted the award for the team.”

When he says team, the sheriff doesn’t just mean his deputies. He includes the county officials and the people who live in Mercer County.

“This is for everybody in this community who supports what we do,” Kelty said.

Gaddis was recognized for his efforts to stop a runaway vehicle this past June. The driver called 911 saying her vehicle was accelerating with no way to stop. Gaddis was able to bring the runaway vehicle, which also contained a one-year-old baby, to a stop prior to entering the intersection of US 127 and the Bypass. Gaddis previously received a commendation in 2019 for his efforts in helping a family escape the massive brush fire on Chinn Lane.

Prather and Brown were recognized for their efforts in saving the life of a seven-month-old baby in a car crash on Mackville Road in January 2020. The child’s parents died in the accident. The deputies were also commended by the county for their efforts.

Abrams-Gray received her award for her support of the sheriff’s office. Kelty said she helps deputies find accommodations for people in need and helps raise funds for the Shop For A Hero program and the Sheriff’s Association’s Boys And Girls Ranch.

The awards were announced at the association’s annual conference in Bowling Green last week. The Mercer County Fiscal Court also celebrated the honor at their meeting on Tuesday, Feb. 9.

“That’s quite an honor for one community,” said Mercer Judge-Executive Milward Dedman, “but it’s well deserved.”