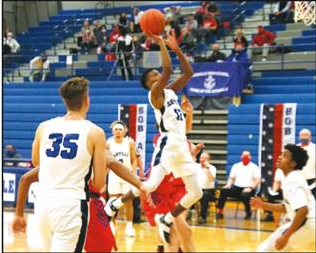 Sophomore Sage Dawson takes to the air in the Admirals’ come-from-behind win over Lincoln County. (The Harrodsburg Herald/Riley Johnson).

Both teams stayed neck-and-neck with scoring going back and forth.

The Admirals took good shots, but they bounced off  the rim. Lincoln, however,  seemed to hit every shot. The first quarter ended with Danville trailing by 7, 11-4.

In the second quarter, the battle continued. Danville finally got shots to begin falling and cut Lincoln’s lead to five, 22-17 at the end of the first half.

After halftime, Danville found their rhythm and put  up more shots up and went on a 16 point scoring run. Danville took the lead away from Lincoln County at the end of the third quarter 37-35.