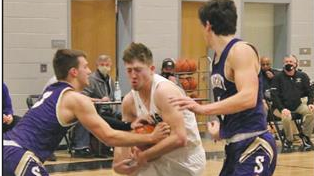 Talk about heavy traffic. Boyle’s Jagger Gillis drives to the net against the Brian Jumpers. Gillis finished the night with two points and four rebounds. (The Harrodsburg Herald/Sam Warren).

Herald Staff
sports@harrodsburgherald.com
The Boyle County Rebels boys’ basketball team (6-1) proved they mean business by defeating Region 12 defending champions West Jessamine last Tuesday, Jan. 26. If they could beat the Somerset Briar Jumpers (9-2) though, they would surely be considered the new top team in Region 12. Somerset edged the Rebels 72-68 despite a 37 point performance from junior guard Luke Imfeld.
Boyle County was without their head coach Dennie Webb due to COVID-19 protocols. Junior guard Hagan Webb, who averages 13.3 points per game, was also absent from the Rebels lineup.
The Rebels dug themselves a hole early, going down 9-4 following a three from senior guard Dylan Burton.
A Kannon Tucker three gave the Jumpers a 17-10 advantage after eight minutes of play, and on the first possession of the second quarter, Tucker nailed another triple, as the Rebels hole dug deeper.
Assistant coach Darryl Adams took Webb’s place on the bench as interim coach. According to Adams, the Rebels didn’t come out on top because of a mistake-filled first half.
“The main reason that the Rebels fell short tonight, we did not come out and play focused, we missed several point-blank shots early putting us in catch up mode,” said Adams.