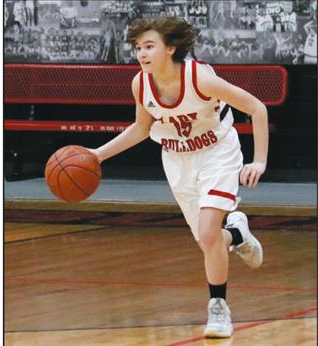 Herald Staff
sports@harrodsburgherald.com
Burgin’s Lady Bulldogs (0-3) were able to play just their third game Saturday, Jan. 30, against the Lady Tigers of Jackson City (3-7). It was a close, hard fought game but in the last minutes the Lady Tigers were able to pull ahead and close out the game 63-57.
Jackson City put points on the board first but freshman Avery Gray answered back with a shot to start the first  minutes of the game 2-2. Gray contributed six points in the quarter and 14 points in the game.
Jackson City added their press and forced the turnover.  Halfway through the first quarter sophomore Baleigh Turner hit a three and cut the Lady Tigers lead to 1, 8-7, but the Lady Bulldogs struggled to break the press and ended the first quarter down 6, 17-11.
Eighth grade guard Gabby Thompson hit a shot to tie the game 17-17. Thompson shows a lot of promise for her youth and put up 17 points in the game for the Lady Bulldogs. The rest of the second quarter was a battle back and forth with the score ending at the half Burgin down two points, 23-21.
After the half junior Ellie Jenkins tied the game up, 23-23. Jackson City jumped ahead 29-23 and Head Coach Keith Monson called time out to refocus his team.