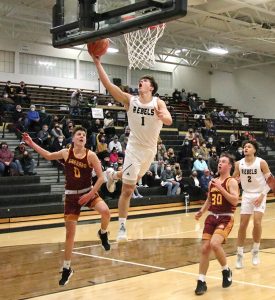 The Boyle County Rebels boys basketball team (3-0) proved well above the competition on Friday, Jan. 15, defeating the Garrard County Golden Lions, in each team’s Region 12 opener, by a final score of 81-59.

Garrard County didn’t have any players capable of guarding Boyle County’s scorers. The Rebels shot the lights out for most of the game and took an early lead that Garrard would never come close to catching.

After one quarter of play, the Rebels led 19-10. Juniors Luke Imfeld and Hagan Webb had little trouble finding open shots in the first half; the duo combined for 31 during the first two quarters, growing Boyle’s lead to 23.

To read the complete story, pick up this week’s edition of the Harrodsburg Herald or subscribe online at www.harrodsburgherald.com