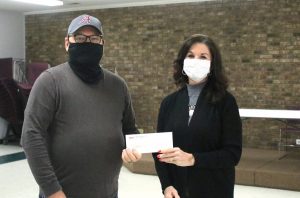 The Harrodsburg Herald/ Jennifer Marsh
Joan Huffman, Harrodsburg Mercer County Tourism Commission board member presented ADCP President Mike Steele, with a check for $7,666 at the January meeting of the park board last Monday.

The first meeting in 2021 for the Anderson Dean Park Board was full of ideas and possibilities. Don Wilburn, event organizer for the park was excited to finalize the plans for the upcoming baseball tournaments run by the park. March begins tournament season and 2021 will be the first year the park has done more than rent out the land for tournament organizers to use.

“It is only a couple months away and I wanted to bring the details to you all,” said Wilburn. “I want to make sure these tournaments are run the way you want them done.”

Wilburn is a seasoned tournament organizer and has built a career running his own. He was hired in addition to the new director, Jeremy Turpin, last year to help generate income for the park, specifically in tournament hosting.

Payment of workers during Wilburn’s tournaments was cash based, but the park does not want to operate on a cash basis and is exploring ideas.

“Checks are cut on Thursdays and require two board signatures,” said Joni Horn, former president. “It would be difficult to have checks by Sunday evenings.”

“We could offer a flat rate donation to teams from both Burgin and Mercer for them to come work concessions and gate,” said Turpin. “Fundraising has been difficult due to Covid this past year. They may be open to the idea.”

Turpin is set to contact athletic directors about the proposition.