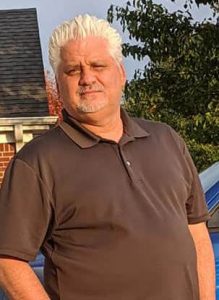 Christopher Dean Reynolds, 53, of Harrodsburg, passed away Jan. 8, 2021, at UK Hospital in Lexington. He was born March 31, 1967, in Boyle County to Diane and Jackie Reynolds.

He was a senior technician at Hitachi Automotive, and worked there for over 25 years. He previously worked for Wade Motor Company of Danville. Chris was of the Baptist faith and attended Mt. Pleasant Church in Harrodsburg. Chris has often described as the person who cared more about others than about himself. He touched the hearts of any who met him. Chris loved the outdoors and sports. He loved hunting and it was one of his favorite past times. Chris also enjoyed riding his side-by-side and camping. He was a diehard University of Kentucky football and basketball fan, and if a game was on you could bet he was watching it. He also enjoyed attending games and was a longtime football season ticket holder. He was also a fan of the Pittsburg Steelers NFL team, he was always watching them Sunday afternoons, and complaining if a Cincinnati Bengals game had the TV spot. Chris also enjoyed watching NASCAR and his favorite driver was Kevin Harvick. It is impossible to find anyone who did not like Chris, and he has a large family that is built on blood and friendship. He will be dearly missed by his family for his laughs, his teases and his outright devotion to put others before himself.
He is survived by both parents, Diane Reynolds of Danville and Jackie Reynolds (Wilma) of Murfreesboro, Tennessee; his life partner and girlfriend, Janice Stakelin Neal; his son, Steven Reynolds of Harrodsburg; stepdaughters Angela and Ashten Neal of Harrodsburg; stepson Allen Neal (Sylvia) of Stamping Ground; two sisters, Angela Reynolds (Caleb) of Nova Scotia, Canada, and Melissa Reynolds Schlachter (Mark) of Shelbyville; stepsister Jennifer Spence of Tennessee; stepbrother Charles Deason of Tenneessee; and six step-grandchilden, Preslye Neal, Parker Neal, Brayden Allen, Kaysen Hopkins, Corbin Pelley and Karlee Neal.
Funeral services will be at 1 p.m. Thursday, Jan. 14, 2021, at Preston Pruitt Spurlin Funeral Home with Rev. Allen Neal officiating. Burial will be in Springhill Cemetery in Harrodsburg. Visitation will be Wednesday, Jan. 13, 2021 from 6-9 p.m.
Pallbearers for Chris include Steven Reynolds, Ralph Byrd, Mark Holmes, Sammy Vest, Rick Presley, Chris Holt, Brian Marcum and Dustin Young.
Honorary pallbearers include Jackie Reynolds, Anthony Becknell, Lee Girdler, Curtis Devine, Jerry Hatfield, Tom Coulter, Jerry Preston, Darin Sims, Ricky Baker, Jerome McPherson, his Hitachi Automotive and Wade Motor Company families and countless others.