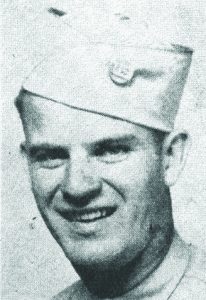 The U.S Army is seeking help in identifying one of the Harrodsburg Tankers who never made it back home.

Terhune was born on July 23, 1919, in Mercer County to Verna Cunningham-Terhune and Alonzo Terhune. According to bataanproject.com, Terhune’s family, which included his two brothers and sisters, lived at 611 East Street in Harrodsburg. He worked at a restaurant and enlisted in the Kentucky National Guard on Aug. 18, 1939. While at Ft. Knox, he lost both front teeth when his tank hit a tree stump.

Terhune was inducted into the U.S. Army on Nov. 25, 1940. The Tankers arrived in the Philippines in November 1941 and were sent to Fort Stotsenburg, Clark Field. On Dec. 8, 1941, Clark Field was attacked by the Japanese Imperial Armed Forces. After months of bitter fighting, the Tankers were ordered to surrender on April 9, 1942.

Terhune was sent to the notorious Cabanatuan Prison Camp. At its peak, Cabanatuan held approximately 8,000 American and Filipino prisoners of war. By the time the camp was liberated in early 1945, approximately 2,800 Americans had died at Cabanatuan. As many as 50 POWs died each day. Terhune is believed to have died of malaria on Sunday, July 12, 1942, at approximately 8 a.m. He was the 789th POW to die in the camp.

After the war, his remains could not be positively identified, and he was buried as an “Unknown” at the new American Military Cemetery.

According to the Department of Defense, more than 72,000 Americans remain unaccounted for from World War II. The Army considers Terhune‘s case active and is attempting to locate his family to collect a DNA sample.

The Past Conflict Repatriations Branch is an organization under the Army Casualty and Mortuary Affairs Operations Division at the Army Human Resources Command (HRC) in Fort Knox. Their  primary mission is to collect, assess, integrate and distribute to the next of kin, concerned citizens, and other government agencies information relating to soldiers who remain unaccounted for from World Wars I and II, the Korean, and the Vietnam War.

However, Jim Opolony, who maintains bataanproject.com, the most comprehensive source about the 192nd, warns that even with a DNA sample, the process of identifying Terhune’s remains and bringing him back home could still take years.

“They are not up to date on the newest DNA methods being used,” Opolony said via email.

The Army is looking for the family member most closely related to Terhune. They are looking for DNA family reference sample to identify his remains. Once Terhune has been identified by the Armed Forces Medical Examiner, the Past Conflict Repatriations Branch will notify the survivor. In addition, the survivors will be briefed on recovery or disinterment efforts, anthropological analysis, dental analysis, DNA analysis and awards. The family will also be informed about the mortuary process and any benefits to which they maybe entitled, including selection of a suitable burial location.  After interment, the government will work to ensure all mortuary, funeral, and family travel obligations have been paid.

Department of the Army

For more great stories, pick up this week’s edition of the Harrodsburg Herald or subscribe online at www.harrodsburgherald.com.