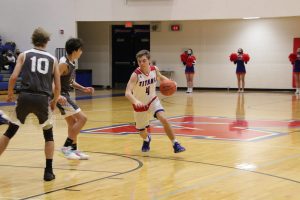 The Harrodsburg Herald/April Ellis
Junior Aaron Caton drove the ball past the Frankfort Christian Academy defender in the Titans 77-39 victory this past Monday, Jan. 4. Caton finished the game with two points and six rebounds.

“I was very happy with how the game went. They played exceptionally hard and played well on the offensive end. Dealing with the difficulties of COVID and the youth of our team, I was proud that they were able to translate what we have been working on in practice to the game,” said Head Coach Josh Hamlin.

FCA’s Brady Barnes put up the first points of the night, but Mercer’s Brayden Dunn quickly answered with a basket of his own.

Senior Sam Baughman showed his leadership on the floor earning his first basket and then hustled back on defense to force the FCA turnover. Baughman had a career high of 28 points for the night.