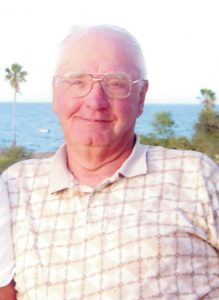 He was born in Covington, Kentucky, to the late Arthur and Viola Hawk Ammon on Feb. 24, 1927. Mr. Ammon was an acoustical contractor and a veteran of the United States Navy.

He spent his childhood in Northern Kentucky working for his family at Brown’s Dry Cleaners. He and his wife Marjorie enjoyed traveling, taking many cruises across the world.

In addition to his wife and parents, he was preceded in death by his daughter, Patty Ammon, and brothers, Paul Ammon and Richard “Dick” Ammon.

A Celebration of Mr. Ammon’s life will be held at a later date when it is safe to be together. In lieu of flowers, memorial contributions may be made to Salvisa Baptist Church.

Expressions of sympathy may be sent to the family at ClarkLegacyCenter.com.