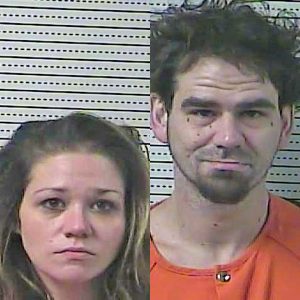 Two people caught in an argument over missing drugs found they still had enough to be arrested this weekend.

According to the uniform citation, Dep. Brown found two people in the middle of a verbal altercation about drugs.

According to the citation, Jimmy C. Richardson, 30, of Harrodsburg, was arguing about missing drugs with Amy Carol Cook, 34, of Parksville.

Despite the argument over drugs gone missing, Brown found plenty of evidence to take both Richardson and Cook into custody. According to the citation, there was a large bag of a leafy green substance on the bed in plain view, as well as several baggies of methamphetamine and heroin in the room safe.

They are both in custody at Boyle County Detention Center. Richardson’s bond was set at $10,000 while Cook’s bonds were set at $25,000.

Dep. Sean Brown of the Mercer County Sheriff’s Office is the arresting officer.