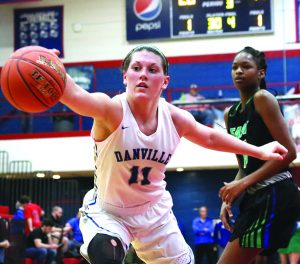 Herald Archives
Danville junior Camryn Preston went for a loose ball on the baseline against East Jessamine in the first round of the 2020 12th Region Tournament last March.

Since Judie Mason’s reappointment as Head Coach of the Lady Admirals basketball team in 2018, her squads have accumulated a 47-16 record including consecutive Region 12 semi-final appearances and a 45th district championship last season.

The Ads return nearly all of their players from last season including the top nine scorers. The squad also contains six seniors which is something last season’s team had to perform without. The leadership of Camryn Preston, Lara Akers, Jenna Akers, Ahyana Burnett, Madison Terrell and Haley Price-Hancock could have many positive effects on a Danville squad that has been competitive but hasn’t been able to get over the twelfth region championship hump.

“We have six seniors and I expect every one of them to be the leader. They have played together and know what to expect from each other,” said Mason.

Preston averaged 10.8 points and a team-best 7.5 rebounds per game during her junior season. The Lindsey-Wilson commit believes the leadership within this squad can make a difference in how far the Lady Ads make it in the postseason.

“The leadership we have this year will help us go much farther than last year. Having this many seniors, there’s always gonna be someone to step up,” said Preston.