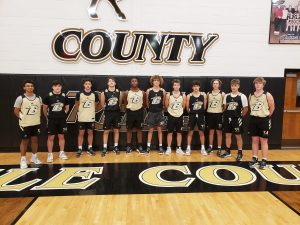 Head Coach of the Boyle County High School boys’ basketball team Donnie Webb says it is a goal of the Rebel’s coaching staff to avoid missing another Region 12 tournament.

Since the Rebel’s first-round exit of the 45th district tournament against the Danville Admirals last season, Webb has been focusing on improving his squad and has plans to compete for a region title.

“Basically, during the off-season we have focused on the areas we felt we needed to improve upon that will help us to get back to and compete for a regional title,” said Webb.

Senior guard Luke Sheperson looks to be the Rebel’s best offensive threat in the upcoming season. Sheperson averaged a team-best 5.9 rebounds per game last season while also scoring the second-most points on the team at 12.2 points per game. Among Boyle County players that took 100 shots during the 2019-20 season, Sheperson’s field goal percentage is the best on the Rebel squad, 51.4 percent.

“Luke’s going to be a vital part of what we want to accomplish this year,” said Webb. Webb expects Sheperson to be a double-digit scorer and one of the team’s leading rebounders in 2021 saying he leads the team through his effort and competitiveness.