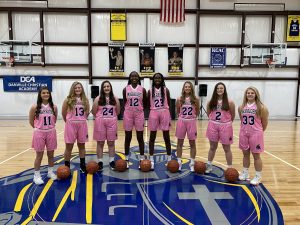 The Danville Christian Lady Warriors had their first opportunity to play basketball this past 2019-20 season and finished with a record of 15-5.

The Lady Warriors coach, Billy Inmon is confident in his team and their ability to compete in this upcoming season.

“We felt like that was a good first start for the smallest school in the KHSAA with a girls program,” Inmon said. “We believe we are mentally more prepared to play a full district schedule this year.”

Danville Christian concluded their last game of the season with a 32-50 loss against Boyle County. The Lady Warriors only scored 10 times and were 30.3% from field goal range. Free throws were also below the usual standards for the team as they were 37.9% from the free throw line. The team only managed to score 11 free throws.

“We missed 18 free throws and gave up some shots that we shouldn’t have,” Inmon said. “I should have approached the game different and made completely different adjustments at halftime.”

Despite the loss, junior Ruth Mbugua had nine points and 17 rebounds for the Lady Warriors. Mbugua was one of Danville Christian’s biggest playmakers last season, averaging 16 points and 16 rebounds a game.

Not only has Mbugua signed a full ride scholarship at Carson Newman, but according to Coach Inmon, she has improved as a player and a leader both on and off the court.