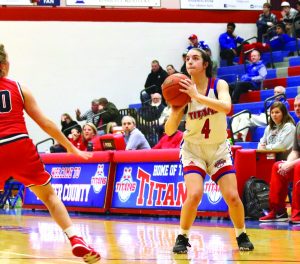 The Harrodsburg Herald/Arpan Dixit
Anna Kate Drakeford attempted a three point shot against Anderson County last February. Drakeford made the second most threes of any returning Lady Titan while also averaging 8.9 points per game during the 2019-20 season.

The Mercer County High School girls’ basketball team finished their 2019-20 season with a disappointing 57-61 loss to Wayne County in the first round of the Region 12 tournament.

The goal is still the same for Head Coach Hayley Spivey in 2020, win the region championship.

“Every year we strive for the same goal of winning a region championship. With the uncertainty and chaos of this season, we are working extremely hard to reach our goals,” said Spivey.

Before the Titans’ final game last season their record was 22-9, with two of those losses being to out-of-state teams. Class of 2020 graduate Channing Lewis and her 15.4 points per game are gone, along with classmate Calicia Smith, as well as Love Mays who transferred to Danville. Spivey says that the only way to overcome this loss of talent is by raising the expectations.

“This year we have high expectations for several of our returning players. Every player will have to take on a bigger role than the previous season,” said Spivey.