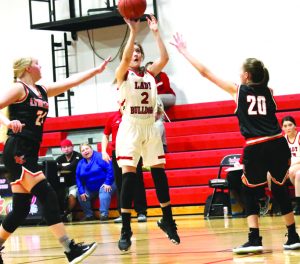 The Harrodsburg Herald/Arpan Dixit
Baleigh Turner led the Lady Bulldogs basketball team in scoring as a freshman, averaging 6.2 points per game throughout the 2019-20 season.

The Burgin Independent Lady Bulldogs basketball team is preparing for the tipoff to their third consecutive season with Head Coach Keith Monson at the helm. In that time, Monson has doubled the Bulldog’s win total from three wins during the 2018-19 season, to six wins during the 2019-20 season. After losing only two seniors, the Lady Bulldogs are returning 72 percent of their scoring from last season and will rely heavily upon the efforts of young playmakers.

Sophomore Kaiden Lewis did not rejoin the Lady Bulldogs lineup this season, nor did class of 2021 guard Hannah Stewart.

Sometimes having no seniors on the team can be beneficial as Monson looks for the young talent in the squad to take a huge step forward in 2021. Baleigh Turner led the Bulldogs in scoring last season as a freshman averaging 6.2 points per game, and Monson says she has worked this offseason to improve her ball handling and leadership abilities.

Burgin will also be led by a strong junior class consisting of Brynn Simpson, Ellie Jenkins and Grace Cocanougher. Their experience on the court will benefit the team tremendously, and most importantly to Monson, they have become leaders to the abundance of young talent on the squad.

“All three have been working very hard in practice and are becoming team leaders,” said Monson, who is expecting Turner and the Lady Bulldog’s junior class to carry the team if times get tough this season.