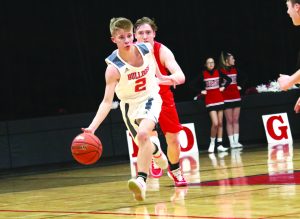 The Harrodsburg Herald/Arpan Dixit
Bulldog guard Jacob Qualls brings the ball up the court against the Powell County Pirates. The now sophomore averaged 6.4 points per game last season as a freshman.

The Burgin Bulldogs boys’ basketball team regressed in the 2019-20 season, only winning four of their 31 games compared to the 2018-19 season in which they recorded 20 wins and nine losses. Last season was one full of struggles for the Bulldogs, but it was also the first season in charge for Head Coach Troy Lee Thomas.

The Bulldogs return a very deep roster in 2021, but will need to find playmakers who can replace the efforts of Wesley Tyler and Roleeke Smith who averaged a combined 22.4 points per game last season. Depth and experience are not always necessarily the ingredients for a good basketball team according to Thomas who says  sometimes experience can be overrated, especially with a new system and head coach.

“We will bring a lot of experience back from last year, but our guys are still trying to understand and be more consistent in our system,” said Thomas.

Thomas says all his squad can do in the upcoming season is work to improve every day whether that be in practice or a game. It’s an ongoing process but it is also a simple one according to Thomas, the players who work hard and don’t miss practices will get playing time and nothing is guaranteed.

“One thing I don’t do is promise any playing time, and that’s going to be based on the guys who show up at practice and just be persistent and are always available. I have a rule, for example, if you don’t practice you don’t play,” said Thomas.