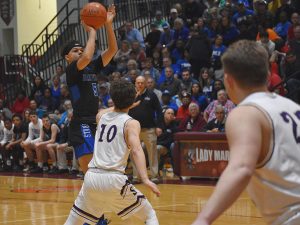 The Harrodsburg Herald/Derek Brightwell
Dante Hayden started the game off red hot with 11 points in the first quarter in the Ads 12th region win over Somerset last year.

The Danville High School boys’ basketball team played for a Region 12 title in the final game of their 2019-20 season, losing to the West Jessamine Colts 78-64. Since that game the Admirals have lost five seniors including Darian Bell and Trey Dawson. Bell and Dawson combined for 24 points and 13.7 rebounds per game last season and their departure leaves a hole in the lineup for Head Coach Ed McKinney to fill in 2021. McKinney acknowledges his team has lost many talented players over the past two seasons, but overhaul is expected in a competitive region like the twelfth.

“We’ve lost a lot of really good players and people over the last two years and that can happen when a team makes it to back to back regional championships, especially in a region as competitive as the 12th,” said McKinney.

Junior point guard Aiden Slone is another talent the Admirals will be missing. Slone averaged 11.2 points per game last season before transferring from the program.