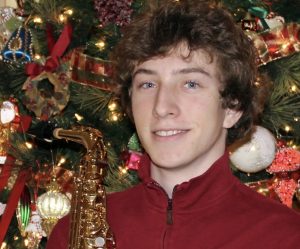 Mercer County Senior High School band member Nicholas Walden recently earned himself a spot in the All-State band. The junior alto-saxophone player earned fourth overall out of the 12 saxophonists that qualified for the band, who were selected out of an initial group of 100 competitors.

Walden had his doubts concerning his performance and said that he was discouraged knowing that only 12 spots were available out of 100. Erica Ashford, Mercer County Senior High School Band Director and Assistant Band Director Adam McRay, both played an integral part in Walden’s realization of his talent. Their instruction, Walden’s hard work and extra teaching from Ron Jones of the Ron Jones Quartet benefited Walden more than he could have imagined.

“Near the time of the audition, I started to think I had a shot, but never would I have thought I would place as high as I did,” said Walden.

Walden remembers his decision to pick up the alto-saxophone as one of impulse. He says it was not anything he had ever explored, it just seemed cool. However, performing is what Walden enjoys most about making music and with the help of many teachers and instructors over the past year, Walden is realizing his potential.

“If you had asked me a year ago, I’d have laughed at the thought of being in the upper echelon of saxophone players in the state of Kentucky,” said Walden. “My initial reaction when I got the call was pure disbelief. I didn’t think I had actually performed that well or even made it at all. Ms. Ashford had called me asking, ‘do you want to hear the good news or the bad news first?’ I didn’t know what I’d hear in the next 20 seconds, so I responded, ‘the bad news.’ She said, ‘well, you didn’t make first chair, but the good news is, you’re fourth overall in the state.”

Walden has been under the instruction of Ashford and McRay since he was in the seventh grade, and he has gained almost all of his motivation and musical knowledge from his band directors. According to Walden band at Mercer County has helped develop his character around the principles set by his instructors. Walden believes practicing music brings about another positive in his character as well, patience.

“Music in general has taught me the virtue of patience. Nothing can grow to excellence without patience, time, and attention to detail. Trust the process. I promise it’ll work,” said Walden.

Ashford had faith in Walden’s abilities in middle school, but credits Walden’s hard work and devotion to improvement as a musician.

“I knew in middle school that he had the potential to possibly make all-state if he stuck with it and continued to make improvements. It has been several years since we have had a student make all-state band, although we have had several audition. When I saw the results, I was glad to see his hard work pay off. With the current situations, to practice and work on something extra along with his normal school work takes initiative and a lot of internal motivation,” said Ashford.

To read the complete story, pick this week’s edition of The Harrodsburg Herald or read online at www.harrodsburgherald.com.