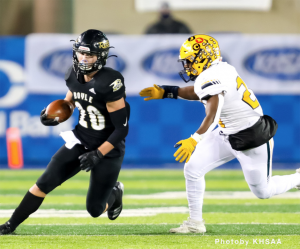 The city of Danville is known as Titletown for a reason. The Boyle County High School football team (11-0) declared themselves state champions for the ninth time on Friday, Dec. 18, following an anticipated match up with the high-flying Franklin County High School football team (9-2). The 31-28 overtime thriller was decided by a 23-yard Jackson Smith field goal on the Rebels’ first overtime possession, the three-point lift was Boyle County’s first lead of the game.

Franklin County took the momentum early on, forcing a Rebel punt on their first drive. On Franklin’s first offensive possession, Nick Broyles took a shot deep down the middle of the field to a wide-open Fred Farrier, but the pass was dropped, becoming the first of many chances missed by the Flyers throughout the game.

Regardless, the Flyers’ offense worked their way to the Rebel five-yard line before handing the ball to sophomore running back Kaden Moorman who forced his way into the end zone for his twelfth rushing touchdown of the season.

On Boyle County’s following drive Jagger Gillis found senior wide out Luke Sheperson deep down the field for a 53-yard touchdown, but the play was called back for a holding penalty on the Rebels.

To read the complete story, pick this week’s edition of The Harrodsburg Herald or read online at www.harrodsburgherald.com.