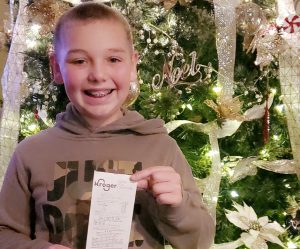 It is the season for giving and one Mercer County Intermediate School student, RyLee Masden, has decided it is better to give than receive when he spent his Christmas money to purchase 20 bags of food for families in need at Kroger last week.

Masden had been saving up all his money to buy a Back the Blue PS4 controller costing around $120, according to his mother, Tara Reynolds.

“He had been saving up for the controller he wanted, then his dad gave him $100 toward his Christmas and he was excited to buy it,” said Reynolds. “On the way home my friend and I were having a conversation about the brown bags at Kroger you can buy to help feed families in need for the holidays, when Rylee asked if we could swing by Kroger instead of going home,” said Reynolds.

Reynolds was swelling with pride for her 10-year-old son once she discovered he planned to spend his Christmas money on helping families in need.

“When we arrived he asked at the service desk how many bags were left and then bought all they had,” said Reynolds. “He had an additional $40 saved before his father gave him the $100 and he deposited the $20 he had left in the Salvation Army kettle.”

Reynolds said she was not only shocked but also over joyed at the altruism her son displayed.

To read the complete story, pick up this week’s edition of The Harrodsburg Herald or read online at www.harrodsburgherald.com.